Home Eats Eats Bore Mi
SHARE
Facebook
Twitter
There’s a lot to love about Mi Cocinita. Killer patio included, this Tex-Mex eatery housed in what used to be a garage apartment is no bigger than a walk-in closet — a little cramped but totally homey. Owners Joe and Virgie Martinez opened the place, in a residential part of the South Side, more than 50 years ago, and having to parallel park on the street and walk past a few healthy lawns on the way to the entrance is part of Mi Cocinita’s charm. The couple still works the kitchen and dining room. The food is homemade, and, no kidding, the scent of fresh veggies and baked goods beckons to passersby louder than a siren. 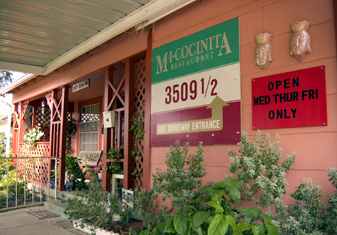 Mi Cocinita is so cute, it’s sort of become a sacred cow. NPR’s The Kitchen Sisters have raved over the joint, and just about every local media review has been glowing. All of which begs the question: Exactly which restaurant is everybody talking about? For as lovable as the place is, the food is merely so-so, definitely not worth the miles of laudatory press.

The tiny establishment looks like a slice of Tijuana, sure, but the menu isn’t exactly “authentic.” The most exotic dish is the nachos supreme.

As part of the Margarita special (served daily), the chicken enchiladas were huge and steaming hot but neither ground-breaking nor memorable. Covered in sour cream and cheese, the carb-heavy platter could have offered more than just cheesy, buttery, milky comfort food. How ’bout some spice, some zest, some peppers — anything. Naturally, some Tex-Mex restaurants try to tone down the heat to attract Americanized palates, but even Grandma would have been reaching for the hot sauce here.

Along with the special came a crispy beef taco. Even though it had a lot going for it — great crunch, great smell, great look — the beef was a little blah. The problem, once more: lack of kick.

Only a fool would raise a stink about a huge steak-and-potato burrito that weighs about 10 pounds and costs $2.75. But other than the monster’s ability to satisfy the urge to sink your teeth into something bad for you, the appeal — and the flavor — was non-existent. Loading every bite with salsa helped, even though the condiment itself wasn’t anything to write home about. But still — no pico de gallo? No sharp cheddar? You shouldn’t have to ask for this stuff.

There were a couple of bright spots. One was the tamale dinner — tender, juicy pork, and salty, soft masa (made by hand on-site every business day), all of it smothered in flavorful melted cheese.

The other was the side of rice and beans that accompanied the Margarita special. The beans were cooked perfectly, not too mushy and not too hard, and the rice was soft, not too sticky, and had a sharp aftertaste. On a plate about the size of a small European car, the “side dish” could have fed a village.

Apparently, Mi Cocinita isn’t about being unique. It’s about filling bellies to maximum occupancy on the cheap. Even the large iced tea was about the size of a 7-Eleven Big Gulp.

Overall, the restaurant’s fans may have a point. Maybe we’re not supposed to take the place so seriously. Maybe Mi Cocinita is just a friendly reminder of how comforting a home-cooked meal can be. After all, Grandma probably didn’t hit a home run every time she rattled the pots and pans, either.