Home News Metro Evangelizing for the Earth
SHARE
Facebook
Twitter
Look around you, the physician told the group at the Texas Christian University student center. Half of the two dozen or so folks in the room, he said, probably will get some kind of cancer eventually. 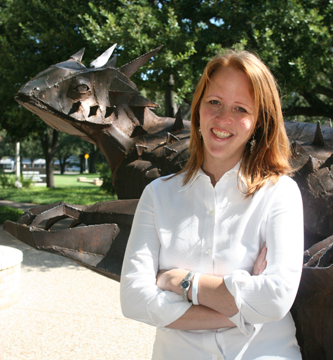 “The answer is not to find the cure or sell pink ribbons or build more cancer treatment centers,” said Dr. Matthew Sleeth, an author, evangelical Christian, and former emergency room director. “The answer is to prevent it, to find the cause.” And that means, he said, that people of faith must take a more active role in caring for the Earth.

Over a buffet lunch of salad and lasagna at the TCU center earlier this month, Sleeth brought his message of evangelical environmentalism to a group of students, faculty, and administrators. He told them how, a few years ago, he had admitted three young women — all in their 30s and dying of breast cancer — to his rural New Hampshire hospital within the span of one week. Disturbed by the trend, he reflected on the dramatic increase in the incidence of this disease. When Sleeth began his medical career, one in 18 women got breast cancer; recent textbooks now give the figure as one in nine. Rising cancer rates, Sleeth believes, are directly linked to mankind’s dishonoring God’s creation.

Since then, Sleeth has become one of a small but growing number of evangelicals across the country who believe that taking better care of the environment is a biblical mandate as well as a public health issue — that cleaning up the air and the food supply is no less important than ministering to the sick. In a weeklong tour of Texas, he made his case to university groups and a handful of churches in Fort Worth, Dallas, and Denton.

A religious reawakening a few years back spurred Sleeth and his wife, Nancy, to take concrete action. They began seriously observing the Sabbath, moved to a smaller home, and gave up many material possessions. Because fossil fuels like coal and gasoline contribute heavily to pollution, the Sleeths downsized their car, started using more efficient lightbulbs, and gave up energy-guzzlers such as their dishwasher and clothes dryer. They cut electricity consumption dramatically, and now their monthly electrical bill is around $9. Sleeth documented their spiritual and environmental journey in his book, Serve God, Save The Planet: A Christian Call To Action.

A widely read man of science, Sleeth believes that the way things are going, the Earth will soon be on life support. He finds the situation so urgent that he gave up medicine to travel around the country, evangelizing about Earth care and the Bible. “I get to tell people about God’s love for the planet,” he said.

One TCU student asked about the stigma of being called a “tree-hugger.”

“The front of my life-study Bible has a tree on it,” said Sleeth. He ticked off instances of tree symbolism in the Bible, from the Abraham oak to references to the throne of God as being an unpolluted river of life with trees on either side, and more. “What did Christ do before he started his ministry? Worked with trees. … It’s not by accident that Christ died on a tree,” he said. “The Bible mentions ‘tree’ 500 times.” Am I proud to be called a tree-hugger? You betcha. The Bible says God loves trees. We’re supposed to love what God loves.”

Until now, conservative Christian groups haven’t been known for their environmental activism, despite a snowballing body of evidence of climate change — such as NASA studies showing that Arctic sea ice is melting at an alarming rate. Some fundamentalists are comfortable with pollution and its effects, because they embrace the Earth’s destruction as an opportunity to rejoin their maker.

But in the last year or so, a growing number of evangelical and moderate Christian leaders across the country have begun to talk about the need for people to become more responsible caretakers of the world for future generations. Earlier this summer, Pat Robertson said in a national broadcast that he has reversed his position on global warming and now believes it to be an urgent threat that must be addressed.

“Everybody expects Unitarians and some Methodists and Disciples of Christ and more progressive congregations to be involved with the environment,” said Jim Schermbeck of Downwinders at Risk, a local environmental group. “What’s different this time out is we’re seeing involvement not only from those congregations but also from Baptists, independent Pentecostals, and so forth — people who have not been traditionally allied with this issue. It cuts across all political lines.” Schermbeck finds this an encouraging sign. “I hope that it accelerates the pace of change, because it needs accelerating.”

Many conservative Christian leaders, however, shun the word “environmentalism” and instead use the term “creation care.” According to the Evangelical Environmental Network, hundreds of congregational leaders have signed their Declaration on the Care of Creation. EEN has also launched an educational campaign and web site (www.healthyfamiliesnow.org). Texas Interfaith Power & Light, a faith-based environmental organization here in Texas, is part of a nationwide network helping put together local awareness-raising events on this issue.

Sleeth came to the TCU luncheon at the invitation of campus minister Angela Kaufman. “There’s a movement around religious stewardship of the Earth that’s rising up all around the country now,” she said. “Caring about the Earth is not just for hippies, not just for tree-huggers. Caring about others and our surroundings is something we’re all called to do.

“One of the dangers is for people to be overwhelmed with too much information and then feel paralyzed,” she said. “We’re not asking people to give up their life or career, we’re asking people to make small changes in how they live day to day.”

The Rev. Kaufman is coordinating a film festival on environmental topics in cooperation with University Christian Church. TCU will kick off the festival with snacks and a free viewing of An Inconvenient Truth, Al Gore’s film on global warming, on Oct. 17 at 6 p.m. in Moudy Hall. Later that week, UCC will present two more films: Kilowatt Ours and A Great Warming, a documentary in which Sleeth appears. All screenings are free and open to the public.

The film festival comes on the heels of a new Bill Moyers television special, “Is God Green?” which airs Oct. 11 on PBS.

“The visit from Dr. Sleeth was a catalyst for reaching out,” said Nelda Mills, a member of the “Caring for God’s Creation Committee” at University Christian Church. She passionately believes that her two grandchildren, 4 and 6 years old, deserve a world where they can go out and play during the summer, like children used to do, and not have to stay indoors because of air pollution. “For so long we have talked about profit, and it’s time to talk about consequences to people and to children,” she said.

A week after Sleeth wrapped up his Dallas area visits, Mills carried a message of creation care to Broadway Baptist Church in Fort Worth. For a small lunch gathering, she played a 10-minute DVD about “clearing Texas air, one congregation at a time.” Then she spoke about how Fort Worth’s air is among the dirtiest in America.

“The situation is critical in this area,” she said, linking local air pollution not just to cars and congestion, but to coal-fired power plants and Midlothian concrete kilns. “People of faith have a role in environmental issues, in caring for creation,” she said. “A coalition of faith groups could be heard when others might be seen as having an agenda. For us there is no agenda except caring.”

You can reach Wendy Lyons Sunshine at wlsun@sbcglobal.net.