Home Music Listen Up Slayer
SHARE
Facebook
Twitter
Since forming the early 1980s, Slayer has always been a big black cloud hovering over the music industry. Brutal and agile, precise and cold, bloodied but clean in conscience, the band hasn’t had to kowtow to commercialism to be successful. Unlike similar outfits, including Metallica, Megadeth, and Anthrax, Slayer never deviated from its original mission. As the other groups gladly mugged for MTV cameras, Slayer just dug deeper into the dark underground. Their commitment is now paying huge dividends. The band’s popularity is at an all-time high, and four years after reportedly breaking up, they’ve just dropped a career-resurrecting album. With all four original members in place, Christ Illusion is Slayer’s most consistent, solid album since 1990’s Seasons in the Abyss. 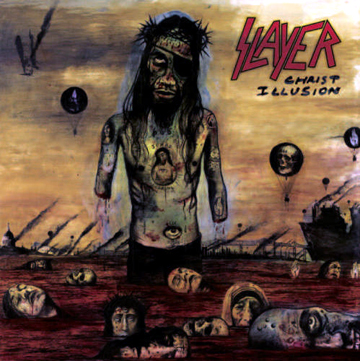 By opening with a pair of machine gun-rapid numbers, “Flesh Storm” and “Catalyst,” the quartet makes its agenda clear: Speed kills. Powered by eighth-note guitar riffs and double-bass drum blasts, the musicianship here equals and occasionally outdoes that of Reign in Blood, essentially the bible of speed metal, written by Slayer 20 years ago. As on Reign, Christ Illusion is driven by the steady roar of vocalist/bassist Tom Araya, whose voice doesn’t give an ounce of mercy or compassion. His is probably the only vocal instrument capable of handling lyrics about warmongering, fundamentalism, and imperial governments without seeming tongue-in-cheek. “Consfearacy” may not win song title of the year honors, but that doesn’t stop it from coming on and staying strong. The drum fills and guitar lines charge along at 180 bpm (beats per minute), and even though all of the band members are in their mid-40s, there may not be another, similar act that can match them beat for beat.

Though bands like Slayer don’t release singles, the track that has the best chance of appearing on late-night metal radio shows, “Cult,” may represent the best of what Slayer can still do better than anyone else: pound out meaty grooves at a furious tempo and make statements such as “I’ve made my choice / Six-six-six!” that would sound silly coming from any other supposedly heavy outfit. (The song is about pretty serious and important stuff, specifically how organized religion fosters hate as much as it does love.)

As with Christianity or Buddhism or whatever floats your spiritual boat, being a Slayer devotee is about letting go of your fears while confronting them. No one is a casual Slayer fan. As in a time of war, if you’re not with them, you’re against them.