Home Film Film Reviews If I Were a Queen
SHARE
Facebook
Twitter
Sofia Coppola’s third film, Marie Antoinette comes trailing bad buzz from Cannes this past summer, where a largely French crowd greeted it with boos and hisses. It’s easy to see what they didn’t like. The director’s less concerned with historical detail than telling the story of the 18th-century French queen in a style accessible to contemporary viewers. Clearly instructed not to study 18th-century aristocratic decorum, the American, British, and Australian actors sacrifice manners for emotional truth. Coppola also decorates the soundtrack with vintage punk rock and contemporary techno music from the likes of New Order, Siouxsie and the Banshees, Aphex Twin, and Squarepusher. (The first thing we hear is Gang of Four’s “Natural’s Not In It.”) The result recalls nothing so much as Ken Russell’s mad, flagrantly inaccurate biopics from the 1960s and ’70s, which used the life stories of Liszt and Tchaikovsky to spin parables of present-day neuroses. Coppola’s after the same thing, even though she lacks Russell’s balls-to-the-wall outrageousness, and though this is definitely her weakest film to date, it still works more often than not. 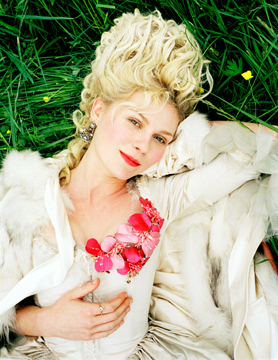 The story begins with Marie Antoinette’s mother, Empress Maria Theresa of Austria (1960s rock star Marianne Faithfull), arranging to marry off her daughter (Kirsten Dunst) to the French king’s grandson, the future Louis XVI (Coppola’s real-life cousin, Jason Schwartzman). From the moment you glimpse this girl rolling out of bed and feeding her dog, you know she’s not ready for anything life’s about to throw at her. The film promptly immerses Marie Antoinette and us in the French court’s stifling routine, illustrated in a funny scene when the future queen is left standing naked in a cold bedroom while her ladies in waiting establish the proper order in which to hand her articles of clothing.

In addition to learning the house rules, Marie Antoinette also has to produce an heir to the throne, and the Austrian ambassador (Steve Coogan) tells her plainly, “You will have little or no influence over the king without a pregnancy.” Her timid new husband isn’t much help. He’s interested only in hunting or making keys, and when he finally gets around to sex with her, he turns out to be an early finisher. (Schwartzman plays most of his scenes like he’s about to burst into tears.) For this, the court blames her. No wonder she drowns her marital problems in gambling, shopping, and partying literally ’til the break of dawn. It’s humanizing to see the archduchess passed out on a chaise longue, still wearing the same dress and powdered wig from the previous night. It also shows how in over their heads these young monarchs are in trying to run a major European empire.

Coppola has always excelled at surfaces, which is something that viewers tend to lose when they see her movies on video or DVD. When you look at the clothes and drapery and flowers here, you feel that you could reach out and hold them in your hand. Because of her painter’s eye and the fantastic work of cinematographer Lance Acord, this movie (filmed on location at Versailles) renders the world of the French monarchy with startling tactility.

This terrific-looking two-hour film runs into serious trouble only in its last half-hour, after Marie Antoinette becomes more comfortable with court life and finally succeeds in bearing children. Once that happens, the movie has nowhere to go except the revolution, which it doesn’t adequately prepare us for. This is deliberate — we’ve spent the whole film inside the fishbowl with the royals, and we’re meant to be as surprised by the revolution as they are. Yet the ending feels not only rushed but oddly forced. Coppola backs herself into a corner and can’t get out. One can’t help but remember Pauline Kael’s line about the 1971 biopic Nicholas and Alexandra: as being about “two dunces sitting on a volcano, and the movie’s more interested in the dunces than the volcano.”

This film isn’t about dunces, but exactly what it is about is hard to figure. It’s based on Antonia Fraser’s excellent biography Marie Antoinette: The Journey, which treated its subject as a self-styled fashion icon turned victim of historical circumstance. The movie never arrives at such a point, though some critics have read it as a reflection of America under Bush (no) or the way our culture treats young beautiful female celebrities (maybe). Whatever it’s supposed to be, it falls short because its main character isn’t interesting enough. The Marie Antoinette here is just a nice, unremarkable girl thrust into a situation she’s ill-equipped to handle, when she would have been happier living on some country estate. That’s not enough to hang a tragedy on. Coppola used Dunst to great tragic effect in her debut film The Virgin Suicides. It’s regrettable they couldn’t repeat the trick here. (It’s even more regrettable that The Queen, a superior movie about the insularity and pressures of royalty, is coming out soon.) Better characterization would have given this invigorating, unorthodox biopic more of a sting. You wind up missing that.