Home Music Music Feature Why the Hell Not?
SHARE
Facebook
Twitter
Although he’s made his name as a novelist and humorist, and may soon be known as Mistuh Guv’ner, Kinky Friedman, as many of y’all may be unaware, is a musician at heart — and a helluva innovative one at that. During his halcyon days 30 years ago, when he toured with Bob Dylan’s Rolling Thunder Revue and recorded with Mr. Zimmerman and Eric Clapton, Friedman and his Texas Jewboys served up deadly greasy shtick, but often on an immaculate plate of traditional pickin’ and a-grinnin’. Amazingly, the novel dichotomy ratcheted up both the irreverence and the humor. “Sold American,” the title track to his 1973 debut album, moseys steadily down Music Row, stopping here and there to ponder a yawning pedal steel or the peaceful click of rim shots. Not ironically, the song is addressed to a waning rhinestone star and was recorded in, of all places, Nashville. “You told me you were born so much higher than life,” Friedman sings, affecting a slight, calculated twang. “But I’ve seen the faded pictures of your children and your wife / Now they’re fumblin’ through your wallet / And they’re tryin’ to find your name / It’s almost like they raised the price of fame.” 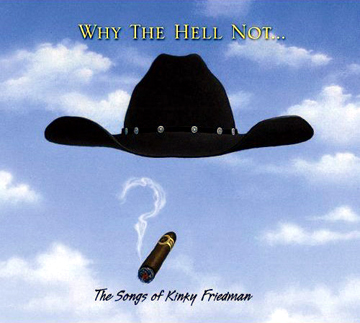 “Sold American” is funny but also brushed with sorrow, like most of Friedman’s best songs. (He calls them “pearls in the snow,” his bits of quiet, soulful brilliance almost lost among the stentorian satire.) Maybe his ability to do pathos balances out his penchant for caustic humor, as in classics such as “Asshole From El Paso” and “Get Your Biscuits in the Oven (and Your Buns in the Bed).” His Holocaust country song (that’s right, “Holocaust country song”), “Ride ’Em Jewboy” could have been a Willie-Waylon-Jessi ballad. Had the hook not been sung plaintively and with high, lonesome backing harmonies, however, it wouldn’t be nearly as poignant — or as darkly comical. “The Take-It-Easy Trailer Park,” written by Friedman with Van Dyke Parks, is a bona fide weeper. The tempo sways gently back and forth, and, sticking out of the tune’s mid-section like a deep sigh, a sad, distant, melancholy cello moans.

But Friedman’s favorite form was satire, and his favorite topic bigotry. In satirizing it, ostensibly to defuse it, he wielded the First Amendment liberally. Politically charged words — “nigger,” “spic,” “wop,” “mick,” “kike,” you name it — regularly figure into a lot of Friedman’s songs. As with satirists before him, including Mark Twain and Lenny Bruce, Friedman never utters the epithets as himself but as a character. Maybe in some perverse way, the singer-songwriter reveled in listeners’ shocked expressions, both real and imagined; kind of like the friend who tells off-color jokes just to denounce them publicly while secretly luxuriating in their cruelty. Still, Friedman may not have known or, more likely, may not have cared, but back when he was turning off hicks and turning on progressives with his brand of bizarro C&W, he may have been writing one long requiem for his future gubernatorial campaign.

Just in time for November, the character assassination has begun. The NAACP clamored — and is still waiting for — an apology from Friedman for his decades of supposed racial insensitivity, and the four other candidates and their supporters are visibly savoring the dark horse’s impending doom. Anti-Kinky crusaders have never had to travel far for ammunition. The nearest bookstore offers enough of his written work to indict him on charges of racism, sexism, intellectual elitism, good-ol’-boy-ism, and rascalism. Now the smear job may be even easier, thanks to, well, two new Friedman c.d.’s: Why the Hell Not … The Songs of Kinky Friedman (Sustain Records), a tribute album whose proceeds will help fund “Kinky in ’06,” and The Last of the Jewish Cowboys: The Best of Kinky Friedman (Shout! Factory).

Best Of is a collection of live and studio recordings of most of Friedman’s better-known tunes, including “Homo Erectus,” “People Who Read People Magazine,” and “Waitret, Please, Waitret,” in addition to the songs mentioned above.

For the most part, when seen through the screwy prism of big-time politics, his music works against him. To some folks, ain’t an ounce of God’s sufferance can redeem a body who’s written and performed lyrics that so limitlessly ooze double-entendres and boil over in sarcasm. One of the funniest/worst, from “Waitret, Please, Waitret” (translation: “Waitress, Please, Waitress”), goes, “Waitret, please, waitret / Come sit on my fate / Eatin’ ain’t cheatin’ / Lord, it ain’t no disgrate.”

All of Songs’ players do their best to temper the bite. By covering “pearls in the snow,” Lovett, Bruce Robison and Willis, Charlie Robison, Willie, and McClinton only have to drop a few keys and slow a few tempos. The dirty work falls to the other contributors.

On “Biscuits/Buns,” a bitter, black Valentine no matter how you cut it, Fowler ramps up the original’s almost-too-subtle goofiness, and he actually issues an apology at the end. “Just kiddin’ ladies!,” he says. “Love you, babe! Uh, I’ll get on home and take out that trash.” He’s joking, but, considering the circumstances, he really isn’t.

Lovett, Fowler, and all the rest perform valiantly, even if they tend to neuter certain moments. You also may wonder why the Stragglers were chosen to cover anything here. Boland’s smoky croak alone could turn “Happy Birthday” into a funeral dirge.

So why didn’t Sustain Records just stuff Songs with Friedman’s non-abrasive work? Well, as any political mastermind will tell you, hiding skeletons only makes ’em bigger.

Shame, ’cause few voters or outside observers will have the wherewithal to parse Friedman’s music for its subtle, hilarious genius. At the core of all of his songs is freedom — freedom from the tyranny of hewing to a single political ideology, of kowtowing to societal pressure, and, most importantly, from the tyranny of being forced to follow the herd.

The song that best encapsulates all that is Kinky is “They Ain’t Makin’ Jews Like Jesus Anymore.” The last track on Best Of and the one reconfigured into a barnburner by Todd Snider on Songs, it’s a semi-autobiographical yarn about our hero, a bar, and an alcohol- and angst-ridden good ol’ boy babbling on about religion and politics. The guy says to Friedman, “ ‘They oughta send you back to Roosha, boy, or New York City, one / You just wanna noodle a Christian girl, and you killed God’s only son.’ ” Friedman replies: “I said, ‘Has it occurred to you, you nerd, that that’s not very nice? / We Jews believe it was Santie Claus that killed Jesus Christ’ / ‘You know, you don’t look Jewish,’ he said. ‘Near as I could figure / I had you lamped for a slightly anemic, well-dressed country nigger.’ ” Friedman warns the rednecked stranger “ ‘They ain’t makin’ Jews like Jesus anymore / They don’t turn the other cheek the way they done before,’ ” and proceeds to knock the “nerd” out.