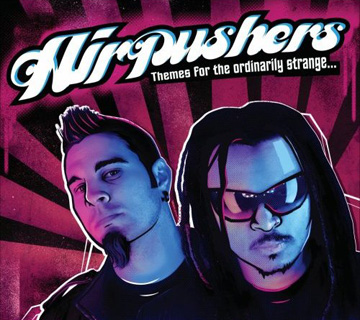 Funny, because Printz Board and Tim Izo Orindgreff regularly contribute to the multi-platinum Black Eyed Peas. Themes, the duo’s first collaboration, has been two years in the making. Board and Orindgreff probably started work on the record around the same time as the BEP’s were on the cusp of their big breakthrough.

Themes opens with the clarion call of “The Duke,” instantly announcing epic ambitions and the musicianship to meet them. For the album, the duo enlisted the aid of several guest vocalists. On “Superfriends,” Sy Smith’s smooth yet deep falsetto makes a statement — that Airpushers have a lot more to blow than smoke. An assortment of brass instruments also often serves as voices, commanding attention throughout.

A minor quibble: At times, the disc comes across as intentionally cheesy, relying on slick electronic beats and mindless, cheeky lyrics. (One song is entitled “She’s a Red-Headed Speedskater.”)

In addition to the BEP’s, the twosome have worked with Macy Gray, Dr. Dre, and Justin Timberlake, to name a few, but setting Board and Orindgreff apart from their multi-platinum projects is the ability to condense assorted, frequently disparate chunks of pop music into a single style.