Home Music The Show Urizen
SHARE
Facebook
Twitter
Urizen is a local metal quartet, though “metal” may be too limited a word to describe exactly the kind of racket Urizen makes. Their music also has touches of jazz, Threepenny Opera, and pianistic lounge, among other stuff. A better modifier may be “abso-fucking-lutely insane.” 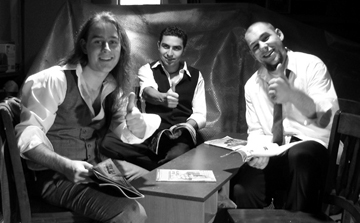 On the concept album Autocratopolis, the band’s debut from about a year ago, Urizen (pronounced YER-is-in) pulls a neat trick and manages to avoid sounding like anyone other than themselves, even though they conjure up everything from Theater Fire’s sepia-toned melancholy to Legends of the South’s blistering, hyper-frenetic thrash. There’s just something about the performances that unites all of the grooves. Probably the millions of rehearsals that speak through every note.

On Autocratopolis, we follow the daily ups and downs of an Everyman who may or may not be living in the future, hence the assortment of styles — different sonic backdrops for different lyrical moods. Just like life!

The three original members moved here a couple of years ago from Colorado. Like any self-respecting angry youngsters, they first put together a black metal outfit called Dunwich Horror. (Oooh, scary!) Then they met a drummer, relocated here, and started work on the album. They also apparently grew up.