Home Music The Show The Burning Hotels
SHARE
Facebook
Twitter
The Burning Hotels often get compared to The Killers. But the local quartet does the disco-rock darlings somewhat differently, chiefly by stressing melancholy over angry arrogance and by stripping glam of its cocksure poses to reveal its true, tortured visage. The Hotels don’t drive their music. Rather, they let it billow in their wake, as if Matt Mooty, Chance Morgan, Wyatt Adams, and Marley Whistler are trapped in an endless existential conversation about life, love, death, and remorse, and the language they speak is thumping, clanging, grooving rawk. 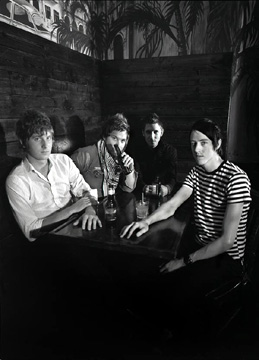 As for the delicate, chiming, plucked guitar progression around which the track essentially pivots, there’s a hint of music box creepiness to it. The Killers wouldn’t deign to mar any one of their shimmering nightclub ditties with such a suggestive reference, or slow a catchy locomotive of a number like the Hotels’ “Stuck in the Middle” by half, just to emphasize the song’s thematic thrust and, not coincidentally, its title.

When the Hotels started out, they were anointed over about 99 percent of the other indie bands in North Texas as openers of choice for big regional shows. A lot of scenesters wondered if Mooty, Morgan, and company could weather the hype. Well, it’s been over a year now, and all the band has done is grow stronger, tighter, and more distinctly Burning Hotels-ish. Their new Eighty-Five Mirrors e.p. can be ordered through MySpace.com/theburninghotels.com.