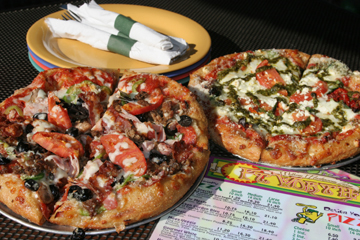 A buddy of mine popped in on one slow Saturday afternoon, ordered a turkey sandwich, and sat down and waited. And waited. No water. No courtesy pop. Nothing. Finally, when the sandwich appeared on the serving station behind the counter — and not a single Mellow Mushroom worker noticed or cared to — my buddy got up, walked behind the counter, and helped his freaking self.

There’s more. Another friend of mine ordered a pizza for pickup, but when he arrived after the specified half-hour wait: nada. His pie was MIA. Calm but frustrated, he re-ordered, and then, after about 10 minutes when he was served an awful, clearly undercooked atrocity, he in so many words asked what the fuck was going on. A server stammered incoherently. No “Sorry, sir.” No complimentary parmesan cheese packet. Nothing to assuage the anger. Or the hunger.

Mellow Mushroom is the only North Texas address of a small national chain that began in Atlanta almost 40 years ago. In keeping with the overall theme, the restaurant on Bluebonnet Circle near TCU pushes the Summer of Love, with DayGlo decorative touches, images of several lame anthropomorphicized mushrooms whose caps function as berets or something, and cute names for certain pies, such as The Magical Mystery Tour and Kosmic Karma. I’m not saying the servers are stoners. Just that I wouldn’t be surprised to learn that company policy encourages the suggestion of zonked behavior.

My pals’ miserable experiences and other, similar tales of woe I’ve heard are probably due to the nature of the small- to medium-sized chain pizza parlor. Located near a college campus, Mellow Mushroom hires a lot of young folks, historically the cheapest and least conscientious minimum-wage earners on Earth.

The mishaps are also more than likely the result of, well, starting up a restaurant.

The good news is that the service at Mellow Mushroom has improved dramatically over the past few months. Diners no longer feel they’re dealing with dooods. (“Yes, I’d like a medium pizza with sausage and green peppers.” “Whoah! Dude! Did you just see that giant lizard swallow table six?!”) Now that we’re in the hands of pros, the joint’s health-conscious and eminently noshable food makes the strong argument that Mellow Mushroom can overcome its rap as a den of ineptitude.

What you’ll first notice about Mellow Mushroom’s fare is the quality of the ingredients, starting with the dough. Made with spring water and vitamin E-enriched, high-gluten flour with wheat germ, and dusted with parmesan, the garlic butter-based crust is fluffy but not dense and begs to be chomped into. Also, true to the holistic spirit of the ’60s, all of the meats are pre-cooked and drained of excess fat before being served, and only reduced-fat mozzarella cheese is used. Except for the meat, which tends toward dryness, all of the extra, behind-the-scenes, you-are-what-you-eat flourishes add up to some unique and tasty cuisine.

There’s something to be said for sloppy pizza, the kind that leaks grease all over your hands and that you have to fold into a half-pipe while eating to avoid grossing everyone out. But ain’t a damn thing wrong with neat slices, and Mellow Mushroom’s retain their firmness, whether your pie has 12 different toppings or none. When working on a lovely monster like the House Special (pepperoni, sausage, ground beef, onions, green peppers, mushrooms, black olives, tomatoes, bacon, ham, and extra cheese), you’ll be thankful your slices are sturdy enough to handle the weight on top. Which brings up another plus: Mellow Mushroom doesn’t skimp on toppings, and, unlike at some other, more reputable eateries that also serve pizza, Mellow Mushroom’s cooks distribute toppings evenly. None of that pepperoni-on-two-slices-of-an-eight-slice-pie crap here. Every scrumptious bite of the Veggie with pineapple had some of the fruit, plus mushrooms, onions, green peppers, black olives, fresh tomatoes, and broccoli, just as advertised.

The other side of the menu is almost as killer. The Italian hoagie was pretty close to authentic. Though it lacks capicolla, genoa salami, mortadella, soppressata, or other distinctly Italian meats, and though it comes on your choice of either wheat or French bread, it does the job, with pepperoni, ham, lettuce, tomato, provolone cheese, spiced and grilled onions, and mayonnaise. While the tangy, salty flavors came shining through, the composition was way off. There was too much French bread and not nearly enough meat and cheese.

The sausage calzone was another moderately successful break from tradition. The huge, doughy turnover wasn’t bad, but without any ricotta cheese, it was more like stromboli than an honest-to-goodness calzone. Purists beware.

Why the cooks would skimp on the single ingredient that most differentiates the two delicacies is a mystery. How a restaurant once staffed by so many feckless employees has managed to not only avoid accidentally starting World War III but thrive — you should see the weekend crowds — is the bigger mystery here, but one we need dread no longer.