Home Arts Stage Dash It, ‘Jeeves’!
SHARE
Facebook
Twitter
In 1957, the prolific author and playwright P.G. Wodehouse said, “I go in for what is known in the trade as ‘light writing,’ and those who do so are looked down upon by the intelligentsia and sneered at.” Indeed, certified Club Intelligentsia member Sean O’Casey attempted to insult Wodehouse by calling him “English literature’s performing flea.” Wodehouse promptly adopted the epithet as the title of one of his memoirs. 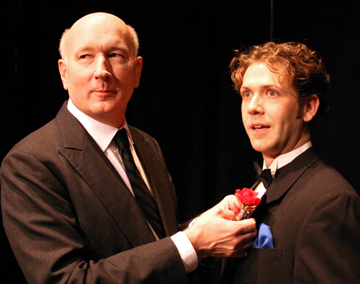 This was a perfect demonstration of Wodehouse’s affection for absurd human nature, neutering a fatuous slam while suggesting that it might, in fact, be true. But that generosity wasn’t always perceived by the British upper crust of the mid-20th century, and it’s no wonder: They are the primary targets of his fierce, manic farces. His two most famous creations, the half-witted but arrogant dandy Bertram “Bertie” Wooster and his manservant, the calmly observant knight-in-a-valet-suit Jeeves, are regularly used to reveal the hubris, hypocrisy, and, at least implicitly, the injustices of the English class system. In Wodehouse’s time and place, his “light writing” was fairly subversive stuff.

Still, the author was by most accounts an apolitical person. His mission was to entertain, not advocate. Stage West has chosen Chicago playwright Mark Richard’s adaptation Right Ho, Jeeves as its holiday production, and it was, as Bertie might say, a dashed-good decision. What a relief for one season not to celebrate how noble and generous we are but how foolish we can be.

It’s a tribute to the author that the typically intricate construction of his comedies makes them difficult to summarize. Right Ho, Jeeves takes place at the country estate of Bertie’s temperamental Aunt Dahlia (Kelly Thomas) and involves romantic machinations that include, among others, a shy and awkward reptile scholar (Scott Meek); a young aristocrat with a hyper-developed sense of the romantic (an appropriately bubble-headed Dana Schultes); and a quarrelsome fiancé who has a vigorous appreciation for fine food (Charles Ryan Roach). Suffice it to say, the template for any Wooster and Jeeves story is this: The self-absorbed, hedonistic Wooster attempts to create or improve a situation with some ridiculous plan, makes a complete hash of the affair, and watches as Jeeves coolly steps in and corrects the situation with his solid understanding of human nature. It’s a depiction of the wisdom of the underdog that extends back through Shakespeare to comedies from the Roman era.

In the central role of Bertie Wooster, Reagan Adair is called upon to be many things — protagonist and master of ceremonies, comic foil, and engine of farce — and the result might be described as less of a performance than a dazzling display of pure theatrical ability. As Richard’s adaptation is written, Adair performs a long series of duets — with Jeeves, with Aunt Dahlia, with his male friends and their paramours, and most notably, with the audience. (Adair regularly engages in direct address to ticketbuyers.) In fact, the other characters don’t interact much with one another. This would be tedious with a less nimble actor, but Adair flawlessly drives the plot and sets the high-wire tone. He plays an utterly clueless hero who nonetheless deserves a smidgen of admiration for his dedication to his own ideas. It’s thrilling to watch, but you fear the poor chap might have to be hospitalized for exhaustion after the final show.

The part of Jeeves is perfect for the naturally reticent acting style of Stage West’s in-house actor-director Jim Covault. He can make a quietly enunciated “If you say so, sir” sound like the vocal equivalent of flipping the bird. At times he almost resembles the great Sir John Gielgud, who of course won an Oscar playing a Jeeves-like ripoff in the ’80s flick Arthur. If they have copyright lawyers in the hereafter, Wodehouse should consider consulting one about that hugely popular and inferior comedy.

The rest of the cast is in some sense an orchestra conducted by Adair, and they all get their exquisite solos. Meek, as the academic of amphibians who gets the dreaded label of “newt-fancier,” delivers a speech at a private boys’ school while his character is soaked to the gills with gin. In one of the smaller roles, Schultes wanders about the stage in a Xanax-ish reverie, staring at the ceiling and commenting that stars are either God’s daisy chain or the teardrops of fairies. (“She can’t have it both ways,” Bertie opines later).

As directed by Jerry Russell, Stage West’s version of Right Ho, Jeeves is bracing escapist entertainment that, ironically, refuses to turn away from the harsh reality (and even harsher consequences) of human frailty. Hearts break, egos are affronted, people pursue selfish agendas and manipulate one another with sometimes the best of intentions — and viewed with a fine Wodehousian eye, it couldn’t be more hilarious and, oddly, affirming.