Home News Metro Reining in Tasers
SHARE
Facebook
Twitter
If State Rep. Lon Burnam has his way, beginning next September, police across the state are going to have to think twice about pulling their high-voltage Taser weapons and zapping members of the public whenever the mood strikes. 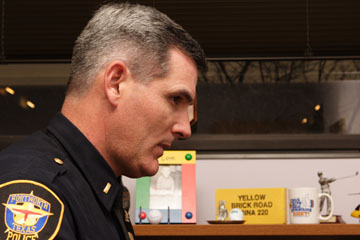 The Fort Worth Democrat filed a bill late last month that would severely restrict Taser use among policing agencies statewide, limiting the use of the 50,000-volt weapons to situations in which deadly force is justified.

Not surprisingly, police were not thrilled with the proposal. “I guess he’s trying to label conductive energy devices [Tasers] as a deadly weapon,” said Lt. Dean Sullivan, spokesman for the Fort Worth Police Department. “But if you’re going to restrict the use of a CED to deadly force levels, you limit the number of options an officer has to control situations.”

In 2006, following the deaths of several unarmed suspects who had been shocked repeatedly with the weapons by Fort Worth police officers, the department changed its policy on Tasers, placing some limits on their use. Under the new policy, Tasers can be used in situations that call for officers controlling suspects with their hands — but the weapons can be used then only in what is called the drive-stun mode, in which it is placed directly against a suspect’s body or clothing. In more serious situations, where officers are permitted to use what is called intermediate force — using their elbows, knees, or a baton — the Tasers can be shot from a distance, with prongs delivering the shock.

Restricting the weapon to situations requiring deadly force would not be effective, Sullivan said, because in those situations, “the firearms these officers are trained in are far more effective and accurate” than electronic stun devices.

Burnam’s bill was introduced the same day that the Houston Chronicle published a front-page story on State Rep. Garnet Coleman’s plan to introduce, in the legislative session that starts Jan. 9, a bill calling for a complete moratorium on Taser use in Texas. The story dealt with the proposed bill and Houston Police Chief Harold Hurtt’s vocal response to it.

Coleman’s moratorium was proposed in the wake of Houston Mayor Bill White’s call for an analysis of how and when Tasers are being used on Houston citizens. White made the suggestion after receiving complaints that Tasers are being used disproportionately on blacks and other minorities in that city. According to Hurtt, Houston police used their Tasers almost 900 times in less than two years. He admitted that officers would have been justified in using their guns — that is, in using what is accepted as deadly force — in only 39 of those instances.

In the most widely covered recent case of Taser use by Houston police, officers used the weapon in November on Fred Weary, a black, 308-pound offensive guard for the Houston Texans football team. Police had stopped Weary’s car because it had no front license plate and because they claimed he was driving “suspiciously.” Police said Weary became belligerent when he was asked for his license and to step out of his car. When officers decided to arrest him, they said, Weary took a step at toward them while they were trying to handcuff him. They then shot him with the Taser.

Charges of resisting arrest against Weary were almost immediately dropped. Weary, said to be one of the NFL’s genuine nice guys, has had little to say on the incident other than noting he didn’t want it to become a distraction for his teammates.

Houston Police Chief Hurtt told the Chronicle he will fight Coleman’s proposal “by making my position known at the state level.”

Coleman told Fort Worth Weekly that he sees a clear pattern of disproportionate use of Tasers on minorities and people with mental illness, and that initiating a moratorium on Taser use until those issues have been studied and addressed is reasonable. Coleman has already authored a bill that is now law that mandates training for all peace officers in Texas on how to subdue people with mental illness. “But some officers are ignoring that training and utilizing Tasers to control those people,” he said. “The only conclusion I can come to is that we must stop all use for a minute to evaluate where we go from here.”

Coleman would like to see a uniform code for Taser use among all police agencies in Texas. “I wouldn’t want it to be too overly prescriptive, though, because then you take the judgment out of an officer’s hands when he or she might need to make a split-second decision. But I would like to see guideposts in place so that we would know and have confidence that officers are utilizing these weapons in an appropriate way.”

Asked about Burnam’s bill, Coleman said that he believes the moratorium and study period must come first. “My goal is to find out what the overall best policy guidelines would be for Texas. And if that, Burnam’s proposal, is one of the guidelines that needs to be in place, I’d certainly support his bill.”

Burnam was not available for comment, but his legislative director, Doug Lewin, said the Fort Worth legislator sees his bill as a good compromise between current Taser use and a full-scale moratorium. “I think policing agencies would much prefer this bill than no Tasers at all,” Lewin said.

In a press release, Burnam noted that, “The number of incidents in which officers use Tasers on unarmed people is truly alarming. There are currently 16 documented deaths due to Taser use by police in Texas … . Tasers have proven to be lethal, and that’s why they should only be used in situations in which deadly force is justified.”

Even when Tasers don’t cause death, they frequently cause physical damage. Fort Worth lawyer Mark Haney represents several people who are suing the Fort Worth Police Department as well as TASER International, Inc., following instances in which they were tasered. “I’ve got one potential client who was shot with a Taser nine times after being stopped for a traffic violation. He had so much damage done to his heart that he’s now has a defibrillator in his chest and is on permanent disability,” said Haney, who agrees with treating the Taser as a deadly force weapon. “Right now it’s being used like a cattle prod in too many instances against too many people.”

Haney also had represented Kathi Hammock, whose husband died in April 2005 after being hit with Taser blasts 25 times in a nine-minute period. Hammock eventually withdrew her lawsuit against the city and TASER International, Haney said. “The company has a scorched-earth policy against lawsuits and bad press. TASER is even threatening to sue the two coroners who directly attributed deaths to electrocution by Taser.”

In Chicago in 2005, Cook County Medical Examiner Scott Denton ruled that the death of 54-year-old Ronald Hasse was the result of electrocution from two Taser jolts, one of them lasting 57 seconds. Denton noted that methamphetamines found in Hasse’s system also contributed to his death but that the drugs alone would not have caused it. And in November 2005, a South Carolina medical examiner’s office ruled that a death at a local jail was the result of “an electrical shock by a Taser weapon” — the prisoner was jolted with Tasers six times, including one shock that lasted two minutes and 49 seconds.

Tarrant County’s Medical Examiner Nizam Peerwani has never attributed a death to Tasers, but after three deaths in Fort Worth between November 2004 and June 2005, he said he would like to see studies on the effect of Tasers on people high on drugs, agitated, or suffering from heart problems.

Dalia Hashad, USA program director for Amnesty International, which has been monitoring Taser use among police forces for several years, was thrilled to hear of Burnam’s bill. “This is one of the most exciting developments I’ve heard regarding Tasers in a long time,” she said. “Other developments, such as the Los Angeles PD ordering another 7,000 Taser weapons recently, are not positive at all.”

The problem, Hashad said, is that even after several years of use on American streets against American citizens, the Taser has still never been tested for either its short- or long-term effects on the human body. “Of course we want to protect both police and citizens from harm, but the Taser might not be the way to do it. We need comprehensive, independent scientific testing on this weapon that, after six years of use, has had nearly 250 people die shortly after it was administered on them.”

Like Coleman and Burnam, Amnesty International would like law enforcement agencies to put some ground rules in place about when and on whom the weapon may be used. “The awful truth is that we’re seeing police officers all over the country use it as a tool of compliance,” rather than as a supposedly less lethal alternative to shooting someone in a situation in which people’s lives or safety are in danger, said Hashad. Top officials of TASER International have said that the weapons their company manufactures are not intended to be used for discipline or compliance.