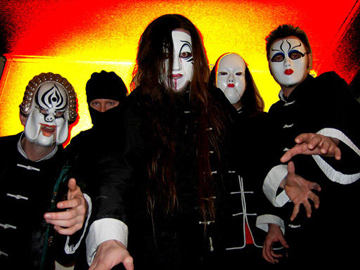 Having something to do with the Christian Right’s illogical argument against evolution, the Denton band’s year-old disc moves like deep thinking: contemplative and light one minute, defensive and heavy the next. The rhythm section of drummer Black Ninja and bass player White Dragon buzz and flutter around the tempo — they tarry on the beat only occasionally. But the playing is never abstract. It’s circuitous, yes, but it’s always easy to hear and fun to follow.

Guitarists Green Dragon and Red Dragon churn out loud, muddy riffs, add bright color, and solo, as rock guitarists should. But SDS makes, in the best sense of the term, contemporary prog-rock, and unlike in indie-rock or bluesy stuff, in prog, the guitar isn’t the star. It’s an equal member of a team of instruments. Early prog-rock bands, like Genesis, King Crimson, and ELP (Emerson, Lake, & Palmer), thought of themselves as mini-orchestras, highly skilled ensembles whose players complemented one another rather than supporting the lead guitarist or singer (or the dude playing the Mellotron). To the untrained ear or casual listener, Steve Hackett (Genesis), Robert Fripp (King Crimson), and Greg Lake don’t seem to be doing much. But listen closely and you’ll notice, to paraphrase Mies, God in the details. The same could be said for Dragons Red and Green’s work on Intelligent Design, which, like most of the album, falls somewhere between metallic rock and classical. (You can only wonder how great the disc would have sounded with a little Mellotron up in there. Too bad the giant organs are so hard to find and maintain.)

The White Swan is an oddly feminine name for a frontman, but his penchant for the operatic and the band’s commitment to the theatrical are part of the SDS mystique; the band arose from the ashes of Djugdish, a regular Wreck Room fave. Except for the Black Ninja, who dresses like, well, a black ninja, the members of Shaolin Death Squad all wear white kabuki masks and kung fu vestments. Only a cynic would indict the Dentonites for being sarcastic. If there’s one thing that the debate over where we’re from and how we got here needs, it’s balance, and achieving and providing balance is the Shaolin priest’s chief purpose.