Home Arts Stage To the Stars
SHARE
Facebook
Twitter
In his major American debut more than 40 years ago, tenor Plácido Domingo sang Edgardo in Fort Worth Opera’s production of Lucia di Lammermoor. (He had previously sung the walk-on role of Normano in the same piece for the Dallas Opera in his official American debut.) The singer returned here almost every year until eventually the company couldn’t afford him. 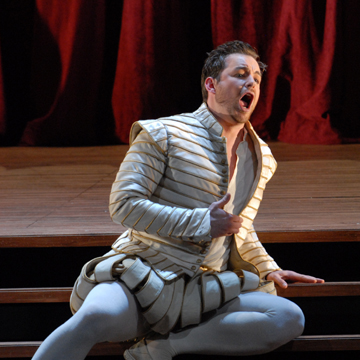 I first saw Domingo during the 1967 season, when he sang Radames in FWO’s Aida. A hearty 29-year-old, he nonetheless sounded tired by the last act. But what a voice! Open and bright from top to bottom, with a signature ring at the top.

Domingo continued to knock conventional wisdom to bits by singing whatever came along, whether it suited him or not. At 28, he managed the title role in Wagner’s Lohengrin for the Hamburg Opera and also tackled Verdi’s Otello for the Metropolitan Opera in New York a decade before doing so was prudent. And now well into his sixties, he’s still going strong, breaking longevity and performance records right and left, as well as most people’s ideas of how a tenor should care for his voice.

All of this came to mind last weekend when 26-year-old American tenor Stephen Costello made his surprise Dallas debut in performances of Donizetti’s Maria Stuarda, or Mary Queen of Scots, with the Dallas Opera at the Music Hall at Fair Park. He learned the pivotal role of Leicester quickly to fill in for an ailing Michael Colvin, who was to make his own Dallas bow.

Costello made his professional stage debut last season as Rudolfo in FWO’s La Boheme. His voice was pure and sweet through the whole range, open and unforced on top. Coupled with an easy stage presence, the young tenor was an engaging, even compelling, young artist for whom one might predict a happy future, not unlike Domingo decades ago.

Happy, that is, if he doesn’t accept the kind of juicy roles that are tough on young voices. (Domingo did but somehow survived.) Costello’s tenor isn’t entirely set. It will mature and darken and become sturdier. But offers will come, and temptations will arise.

Costello is already booked into 2008. He opened the National Opera of Bordeaux this season as Nemorino in Donizetti’s L’Elisir d’Amore, and he sang the Fisherman in Rossini’s William Tell in a stand-up version in Carnegie Hall with the Opera Orchestra of New York. He will repeat Rudolfo in upcoming performances for the Hamburg Opera and Boston Lyric Opera, and he’s scheduled to make his New York City Opera debut as the Duke in Verdi’s Rigoletto next season. All of the roles fit his voice nicely.

In his spare time he’s been busy on the voice competition circuit, pulling in first prizes in the George London Foundation for Singers Competition, the Licia Albanese Puccini Foundation Competition, the Giargiari Competition, where he also won the Audience Prize, and the 2006 Sara Tucker Study Grant from the Richard Tucker Music Foundation.

Mary Queen of Scots calls for two leading sopranos, not, as usual, a mezzo and a soprano, and Dallas Opera had the Romanian Adina Nitiscu as Elizabeth and — in the title role — Ireland’s Majella Cullagh, who made her American debut. Nitiscu has a full, bright top and a dark, thrilling middle register, and she left no doubt that Elizabeth was in charge and intended to keep it that way. Cullagh, a gentler, less persuasive singer, still created a sympathetic Mary, with moments of genuine vocal beauty. Costello, as the love interest of both ladies, sounded forced at times, not so much from musical demands, but as if the size of the hall, with its 3,000-plus seats, demanded an extra boost. He still came through as a major talent whose youthful exuberance can touch your heart.

Set in a stylized Elizabethan Globe Theater with three balconies rising up to an open sky, this sumptuous, new production was designed by Benoit Dugardyn and built in the Dallas Opera workshops. The costume designs, by Ingeborg Bernerth, are equally handsome. A minor quibble: For her meeting with Mary, Elizabeth entered in full court drag, when she was supposed to have been out hunting. No one could get that oversized farthingale over a horse.

Next season, Costello will sing Camille in The Merry Widow for Dallas Opera, and he’ll return to Fort Worth to sing Edgardo in, that’s right, Lucia di Lammermoor. l