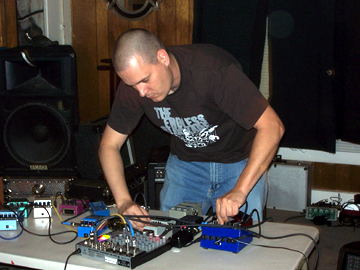 Inspirational, certainly, but it’s also a little morbid, which may explain why Babbitt has kept churning out often morbid hardcore and sludge metal from across the globe for four years, a veritable eternity for a metal indie label. Like most indie labels, Dada Drumming’s goal isn’t to make millions of dollars (though some ka-ching would be OK, obviously), but to get good music into new listeners’ hands, either through his label or promoting shows and bands. As explanation, Babbitt recalled a recent visit from Jason James of Denton’s Resigned to Fate, who stopped by Babbitt’s Fort Worth home office to pick up a freshly pressed copy of RTF’s forthcoming album, Hands Tied Down, on vinyl. James “was ecstatic,” Babbitt said. “And that means more to me than selling records.”

Babbitt, a long-time live-music fan, started the label to provide an outlet for the incredibly obscure international noise scene. After seeing a show by Resigned to Fate, on a bill with another outré band, Four Days to Burn, he expanded the business to include and promote local hardcore sounds. “I thought [both bands] were really that good,” he said. “I thought more people should hear their music.” Getting started, he said, was pretty simple. “You tell everybody to send you stuff, and they do,” he said. “Everyone wants to have their stuff heard.” Babbitt, a drummer and a noisician who performs under the moniker A Fail Association, chose carefully from the flood of responses he received. He wanted music with staying power. Dada Drumming now includes two strong Fort Worth/Tarrant County bands — The Great Tyrant and the defunct El Salvador Birthday Bash — plus Endless Blockade, former Fort Worthians Sourvein, and, from Israel, the now-defunct Rabies Caste.

Babbitt’s first medium was cassette tapes. But as his operation grew, he expanded to encompass c.d.’s and vinyl, the two media in which most Dada Drumming albums are now released. He also gets some of the best dark, progressive, international, and local graphic designers and artists to contribute cover and sleeve art. RTF’s James appreciates Babbitt’s devotion to a rather financially unprofitable pursuit. Babbitt “works hard to expose our records to as many people as possible,” he said. “Also, the other bands on the label are killer.” A single father, Babbitt relocated from Houston to Fort Worth in the late 1990s. Between working a full-time job and raising his son, Babbitt managed to find a little free time to see some shows. One of the first bands he’d heard — and loved — was the legendary prog-metal act Yeti. Now he’s working with two-thirds of the band, drummer John Teague and bassist Tommy Atkins, who with Daron Beck make up The Great Tyrant. Babbitt and Atkins met on the scene, at a 1919 Hemphill show. Babbitt “has endless enthusiasm and dedication to his label,” Atkins said. “He’s a stand-up guy. He comes from the underground like us and the other bands he handles, and there’s a certain kind of trust and honesty that comes from this that you can’t find elsewhere.”

Now 39, Babbitt, who does have a day job but won’t say where, feels his maturity makes him “not have an ego trip.” He takes his work very seriously: “If a label does well as a whole, all the artists do well.” Dominick Fernow, who performs solo as Prurient and who runs the esteemed noise record label and New York City record store Hospital Productions, respects Babbitt’s diligence and taste. Babbitt “manages to blend a sense of underground, classic aesthetic amateurism with a professional sense of dedication on archival formats with total disregard for trends or politics.” Babbitt likens Dada Drumming’s diversity more to surrealism in general than to the label’s ideological namesake, German writer Richard Huelsenbeck’s book A Dada Drummer. “I do like the non-conformed structure of Dada,” he said. “With the label, I don’t do one type of thing.” Babbitt wants to continue making the best of his business and the music he loves — and doing it in Cowtown, where the serious progressive and noise musicians respect one another’s work. “There’s no place I’d rather be,” he said.