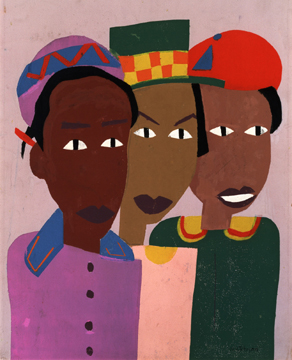 The man’s life was almost as interesting as his work. Born into poverty in Florence, S.C., in 1901, Johnson left home for New York at age 18 to look for work. After several years, he had raised enough money to study at the National Academy of Design, where he won several prizes and was able to study in Europe, where he met and married a Danish artist. They lived in Denmark (with a spell in Tunisia) for much of the 1930s before fleeing to America to escape the Nazis. Sadly, Johnson’s career ended in 1946, as mental illness overtook him in the wake of his wife’s death.

The show at the Carter takes in all phases of his work. His early career was spent in Paris, and his paintings from that period are heavily influenced by Gauguin, Cézanne, Soutine, and other Expressionist artists active at the time. Among his best work are some remarkable landscapes painted in Denmark, Sweden, and Norway. However, upon his return to America he started working in what he called a more “primitive” style, with flat, two-dimensional perspectives and bright colors. His subject material also included more traditional African-American subjects such as musicians and scenes from church life. His works, which numbered more than 1,300, became the property of his lawyer after his institutionalization, and they were almost destroyed before being rescued by the Harmon Foundation, an organization dedicated to promoting African-American art that had aided Johnson during his career. These works were donated to the Smithsonian’s National Museum of American Art, and now they’re in town for us to see.