Home Music The Show Electric Mountain Rotten Apple Gang
SHARE
Facebook
Twitter
Despite two fires and a burglary over the past several months, Fred’s Texas Café keeps on keepin’ on. 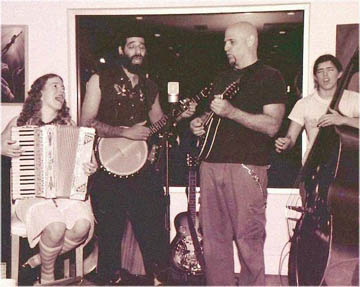 And now that summer’s on the way, what better way to spend a weekend evening than out on Fred’s patio listening to the bluegrass stylings of the Electric Mountain Rotten Apple Gang? Co-led by brothers Darrin and Adam Kobetich, EMRAG continues evolving, though not into “newgrass” or anything notably poppy or trendy. More like “bluegrazz,” or bluegrass and jazz.

Stellar upright bass player Matt Skates and the band have parted ways, making the Fred’s show an opportunity for EMRAG to introduce the new lineup. The most obvious addition is singer Amanda Kitchens, who has a timeless country growl and is pretty handy with an accordion. As she and her bandmates will prove with their pickin’ and a-grinnin,’ the best bluegrass is hard to play but easy to kick off your shoes and dance to.