Fort Worth Weekly
Home News Metro Here, the Sidewalks End
SHARE
Facebook
Twitter
For two years, Mike Wyss has been a member of the Fort Worth Mayor’s Council on Persons with Disabilities. Wyss, 47, has cerebral palsy, and up until four years ago he was able to drive a car. 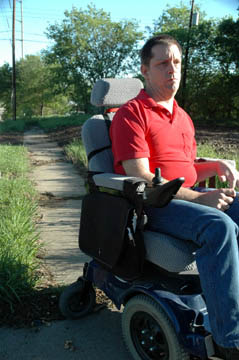 But now he spends most of his time in a wheelchair. He takes the bus to work at his job at the Red Cross downtown, and every day he rides his wheelchair in the street for the three blocks between the bus stop and his home in southeast Fort Worth. Wyss got appointed to the council after he talked to the group about the desperate plight of folks in wheelchairs in Cowtown. Major downtown and Stockyards intersections had no handicapped curb cuts, he told them, and disabled people have to ride much of the time in the street with traffic because of the lack of sidewalks throughout the city. So do kids walking to school, older folks out for a stroll, and younger kids on bicycles. “Cars are always racing by you, and most of them can’t see you,” Wyss said. “Whenever I travel anywhere, about half the time I am in the street. I’m not afraid, but it seems this ought to be an issue for the city. It is really a safety issue.”

City officials have told Wyss they’re “working on it,” and indeed, Fort Worth spends about $650,000 every year in local and state money to add sidewalks in neighborhoods that don’t have them or don’t have enough of them. But Wyss and others don’t think it’s happening fast enough. The events of a bloody night about six weeks ago may do something to change that, however. On Feb. 21, Kimberly Payne, 46, was hit by a car while walking on the Loop 820 access road near the Tarrant County College’s Northwest Campus — an area with no sidewalks. A few hours earlier, on Fort Worth’s southwest side, Larry Nanny, 53, was walking in the 3200 block of Alta Mere Drive when he was hit and killed by a vehicle. And Hewil Bishop, 57, rolling his wheelchair along the frontage road of Loop 820 in southeast Fort Worth, was run over and killed, his wheelchair dragged by the vehicle for several hundred yards, as he tried to make his way — the only way open to him — to a convenience store to buy a few things and talk with friends.

Bishop had some kidney problems, and those, combined with leg problems and excess weight, forced him to use a wheelchair to get around most of the time. He liked to go to the Zoom-In Fina station at Rosedale Avenue and Loop 820, and hang out with friends outside. He traveled the access road almost daily, as the gas station was the only one close enough to reach in his chair. On this night, he was coming home later than usual — about midnight, riding south on the northbound Loop 820 access road. “He was a very nice man, but he didn’t want to spend all his time sitting in the house,” said his brother, Ricky. “I don’t think we ever thought of sidewalks, because that [road] he was on has never had them.” The problem for the city is that officials have no idea how many miles of sidewalks need to be installed or repaired, although it’s clear that the situation affects people in all kinds of neighborhoods. “We haven’t done a survey because we would have to go through every neighborhood and street in the city,” said Tom Leuschen, capital projects manager for the city’s Transportation and Public Works Department. When the 2004 bond issue was passed, the city reserved $500,000 per year for sidewalk construction, mainly for new streets near schools. The city also has $150,000 for another program, in which homeowners pay 25 percent and the city pays 75 percent to build sidewalks in front of existing homes.

Leuschen estimates new sidewalks cost about $20 per linear foot, which means the half-million dollars will build about five miles of sidewalks each year. Mayor Mike Moncrief, in his state of the city address earlier this year, said he wants to build 50 miles of sidewalks in inner-city neighborhoods. He didn’t return calls for this story and has not specified the timeline for that project, which would cost about $5.3 million. Even 50 miles of sidewalks would be a drop in the bucket. In many areas, pedestrians don’t seem to have been taken into consideration at all when urban planning was done, and it’s almost impossible to get around safely on foot. “I thought once they knew the seriousness of the problem, they would jump on it,” Wyss said. “But as you can see two years later, little has been done.”

The city generally requires that new homes and businesses include sidewalks, to conform with the Americans With Disabilities Act. But even in new developments, the sidewalks issue often gets sidestepped. In the last couple of years, for example, new housing developments — and two Keller schools — were built along Keller-Hicks Road. But no sidewalks have been built there, making it impossible for kids to walk to school and creating a traffic nightmare. Fort Worth City Council member Kathleen Hicks said the lack of sidewalks is “terrible and ridiculous.” Some developments “are built with no sidewalks or curbs, and then you go into older neighborhoods throughout the city and see so many people walking in the streets,” she said. “Residents need to make an issue with this, and let us know the importance of having sidewalks in our neighborhoods. We have the Barnett-Shale money coming in, and we should be using some of that money for capital improvements. Sidewalks should be a major part of that.”

Beyond cost, another problem for advocates is that the ADA, in effect, does not require sidewalks to be built in front of already-existing buildings and does not apply to residential properties. The federal act also doesn’t set any minimum spending level for compliance — if the city is making any effort at all to install curb cuts, for instance, that meets the requirements of the ADA. “If the area didn’t have sidewalks before the ADA, they don’t have to put them in,” said Lanny Priddy, a Parker County attorney who works on behalf of Advocacy, Inc., a nonprofit group that advocates for rights for the disabled. The act “never mentions sidewalks … there seems to be a hole in the system,” he said. Several wheelchair-bound people across the country have brought suit in federal court, claiming that a lack of sidewalks discriminates against them by restricting their access to many places. But the courts have generally thrown out such arguments — one judge ruled that a lack of sidewalks affects everyone, not just the disabled, and therefore did not constitute discrimination.

“The argument is ridiculous, because the defense is that we are putting all people at risk equally,” said Jacqueline Vaughn, a political science professor at Northern Arizona University and author of a book on disability rights and policy. “And since the cities have to pay for all of this, it all comes down to money. It is often not a high priority and therefore doesn’t get funded.” Wyss thinks the city needs to work harder on the funding issue of accessibility — for everyone’s sake. “We are getting to a point where we are putting people in harm’s way,” he said. “I know we can’t just open up the city budget and build sidewalks in the whole city overnight,” Wyss said, as he maneuvered his wheelchair through a muddy vacant lot near his house. “But for some reason this isn’t very important for this city. It is not important for the safety of children walking to school and not important for the safety of people like me. I’m just hoping we can address this before more people are killed.”