Home Film Film Reviews Amusing Angel
SHARE
Facebook
Twitter
Attention, Hollywood: Look at Edgar Wright and Simon Pegg. These British guys are doing your jobs, and on a fraction of your budget. 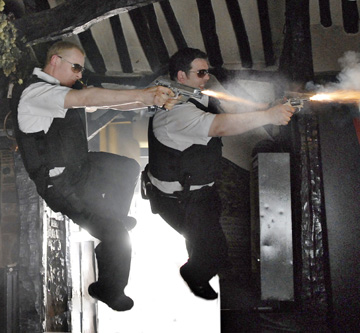 That may sound harsh, but there’s no other conclusion to draw from their latest movie. Hot Fuzz is an action thriller that’s funnier than any comedy — and a comedy more thrilling than any action movie — that Hollywood has put out all year. We should have expected no less from the geniuses who brought us Shaun of the Dead. Having previously wedded romance to zombie film, they’ve now mashed up the buddy-cop flick and English pastoral comedy, and the result is an unholy blast.

Pegg plays Sgt. Nicholas Angel, a by-the-book London supercop who busts four times as many criminals as any other fellow officer. His reward is exile to the countryside in Gloucestershire. “You’ve been making us all look bad,” says his chief inspector (Bill Nighy) in an infuriatingly matter-of-fact tone. Nicholas is reassigned to a postcard-pretty village called Sandford, where the police have little to do except capture the town swan when it gets loose. At first he thinks he’s in hell, but then five people drop dead during his first week on the job, and the bumbling local cops write them all off as accidents, even the florist with the huge pair of gardening shears jammed into her neck. Nicholas’ insistence that the victims have been murdered falls on deaf ears, except those belonging to Danny Butterman (Nick Frost), the town drunk and a Sandford cop, who follows Nicholas around like a starstruck groupie.

This superbly funny movie overflows with delectable bits of comic business, from the local yokels’ incomprehensibly thick accents to the way Nicholas and Danny smoothly accept and then give back a bribe from a rich drunk guy (Ron Cook). Repeat viewings (and you’ll want at least one) reveal the script’s ruthless structure — setups for jokes are ingeniously laid well before they pay off, gags are stuck in the corners of the frame, and innocuous recurring lines such as “Let’s get something from the store” pop up again in crucial situations to hilarious effect. All the attention to detail doesn’t preclude some big-time comedic set pieces like the hysterically awful community theater production of Romeo and Juliet that leaves Nicholas aghast (and probably Baz Luhrmann and The Cardigans, too).

Whereas Shaun of the Dead was cast with sitcom actors, this movie’s filled with British theatrical heavyweights like David Threlfall, Anne Reid, and Edward Woodward in small but potent roles, and it’s jolly fun watching them contribute to the wacky atmosphere. Hyperintense dramatic actor Paddy Considine is particularly rewarding as a buffoonish mustachioed detective, and Cate Blanchett turns up as Nicholas’ ex-girlfriend, uncredited and unrecognizable in a HazMat suit and a surgical mask. They all swirl around the starchy, businesslike Nicholas, and Pegg’s crisp performance holds the movie together. Even while playing such an un-Shaun-like character, the star impressively maintains his well-honed rapport with the shambling Frost.

Many of the comic gags unexpectedly resonate in the action plot, like the swan’s periodic reappearances and Danny’s trick of using a fork and a ketchup packet to make it look like he’s put his own eye out. The filmmakers find their inspiration in junky Hollywood action flicks like Point Break and Bad Boys II, of all places — Danny gushes over them, and Wright and Pegg pointedly lift gestures and lines of dialogue from them. Rather than being derivative, these homages blend effortlessly into the movie’s crackling action sequences. The staging of car chases and hand-to-hand combat is more than dexterous. It’s funny because the adrenaline rush of these scenes is so much at odds with the cozy rustic English setting. The movie builds up to a completely mad climactic shootout that involves the entire town of Sandford, with tweedy professors, supermarket bag boys, and white-haired old ladies all blazing away with shotguns and automatic firearms.

There’s even a philosophical point hidden amid all the craziness. Nicholas thinks the murders are tied together by a land scam perpetrated by the sinister local supermarket owner (Timothy Dalton), but the reality is more banal, more horrifying, and funnier. The movie produces a comic vision of a world that demands mediocrity and perceives anyone who deviates from the norm as a threat, whether he’s a great cop or a terrible community theater director.

Though the joke at the very end is a bit of a damp squib, this is a tiny bone to pick with such an awesome movie. So many filmmakers try to fuse action and comedy, it’s easy to forget just how difficult it is to accomplish. Hot Fuzz succeeds magnificently, and we’ll be hard pressed this summer to find a popcorn picture half as enjoyable as this one. Edgar Wright and Simon Pegg’s skill, creativity, and helpless affection for the action flicks that they’re sending up prove to be such an infectious combination that Hollywood might well say to them, “You’ve been making us look bad.” For this they deserve better than exile to Gloucestershire. They deserve our applause.