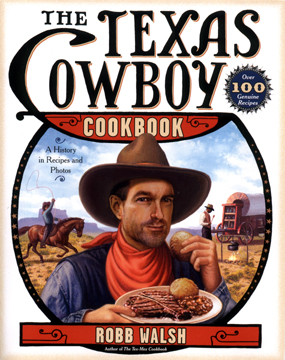 Cookbooks now generally fall into two categories: books by tv chefs for their adoring fans and books for novices. For those of us in between, there has to be more to a cookbook than just recipes, like well-written essays, helpful hints, or insightful looks at the industry.

Journalist Robb Walsh’s new The Texas Cowboy Cookbook is worth its $17.95 price tag. A mix of historical and cultural essays and recipes, his sixth book goes beyond the clichéd view of cowboys and their “grub.” Walsh, an award-winning food critic for The Houston Press, starts off by dispelling the popular notion that traditional cowboy food refers only to a period of about 20 years in the late 1800s, when the chuck wagons roamed the Chisholm Trail. He offers dozens of profiles of people who have contributed to so-called cowboy cuisine, from the chuck wagon drivers of the 1800s to modern chefs like Cowtown’s Tim Love. The book also includes several dozen vintage photographs of life on the trail.

Walsh’s main trick is to define cowboy cuisine by describing the real cowboy. More than a hundred years ago, Texas was one of the cattle industry’s main convergence points. Walsh writes that herds from as far away as northern Mexico and the Carolinas made their way to Texas; adding to the mix were the various influences of African-Americans, Cajuns, and Irish immigrants. Simply put, the plains weren’t as white-bread as Hollywood made them seem.

Mexicans brought along their fideo con carne, beef chili served over vermicelli. In East Texas, the ’pokes were fond of “corn dodgers,” treats that closely resemble our modern-day hush puppies. (Walsh offers a great recipe for them.) And the black cowboys liked their pork chops cooked with cane vinegar — Walsh shows you how to make the chops and where to find the precise ingredients.

There’s a chapter devoted to modern fare, with recipes from Houston chef Robert del Grande, and Fort Worth’s Love and Grady Spears, and you might want to take some of it with a grain of salt. A lot of the recipes look good, but some seem downright gratuitous, like Spears’ Dr. Pepper Tenderloin, beef filets marinated in the soft drink. Both ingredients may scream Texas, but they really shouldn’t touch each other. Trust me. I tried it.

For the really adventurous at heart, try the “Son-of-a-Bitch” — Walsh calls it “the most infamous dish in cowboy cooking.” To make it, you need the tongue, marrow, guts, heart, liver, and kidneys from a suckling calf. To thicken the organ stew, you should chop up the calf’s brain. Goes well with biscuits.