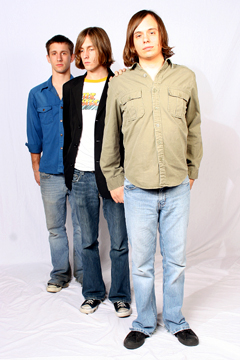 But up until recently, the new Burleson High School graduate had no designs on following in his family members’ footsteps — he was actually sort of anti-rock, pitching on the school’s varsity baseball team and wearing his hair in a crew-cut. The extent of his musicmaking was limited to singing along to Hard Day’s Night. One day, though — for reasons yet to be examined — Danny asked his brother and lifelong roommate, drummer Matt Mabe, to jam. Bewildered, Matt said to Danny, “But you don’t play guitar.”

Cut to today: Danny’s hair is long, he’s ditched baseball, and he’s fronting a new and incredibly advanced neo-grunge trio, Jefferson Colby. “I don’t know where Danny’s playing came from,” Matt said. “The quickness of his skill freaked everyone out.” For his precocious ability, Danny credits Dad, guitarist Mark Mabe, who plays guitar in the classic-rock band Flashback. “My dad showed me the basic chords,” Danny said. “I got those down. … But I’m into weird chords and thinking about the song instead of how cool I am.” The proof is in Inadaze, Jefferson Colby’s recently released debut album.

“The time for us is now,” Danny said. “Things are turning. … People are sick of emo and dying to see something real.” “Real” is an apt word to describe Jefferson Colby’s particular brand of no-nonsense, thunderous rock and, specifically, Inadaze. There’s no proselytizing or lecturing or even concrete lyrics. “Real feelings are our message,” Danny said. “You can relate to a lot of things I say, and everyone shares the same feelings.” Rounding out Jefferson Colby is bassist and co-founder Jeff Moore, a classically trained musician who was a drummer before picking up four strings. Of the switch, he said, “It was a major revelation. I thought, ‘Where’s this thing been all my life?’ ”

Moore, married and the father of a young child, relies on his classical training to create the dynamic rhythmic and structural backbone of Jefferson Colby’s music. “Danny’s ignorance of music is pure art,” Moore said. “I have more theory. … I can read music, whereas Danny and Matt play what sounds good.” The careful balance between form and freedom works well for all of the band members, Moore said. “I can’t imagine playing with anyone else.” Unlike his brother, Matt had no problem throwing himself into music. He started playing when he was 11 — if you could reasonably call banging on pots and pans for lack of a proper drum kit “playing.” (You can.)

Dad had a kit, and it wasn’t long before Matt talked his way into getting behind it. “I drove everybody crazy,” he said, “playing along to Stone Temple Pilots, Led Zeppelin, Rush, and Soundgarden.” Matt said his primary template, however, is Zep’s John Bonham. “I’ve studied [his playing] more than I studied in school “ Matt also plays in Stella Rose, a straightforward rock band that’s as bombastic as Jefferson Colby but not as wild. Stella Rose offers Matt “room for crazy, open arrangements.” Jefferson Colby, on the other hand, he said, has “tighter arrangements — we also have more weird tempo changes and more parts.” Inadaze came about via a Battle of the Bands contest. Last fall, Jefferson Colby entered one at The Aardvark and won. The prize: a few free hours in the studio at Dallas’ Goodnight Audio. “[Goodnight Audio] wasn’t looking forward to [the recording process],” Matt said, with a laugh. “They thought we were just kids, but [Goodnight producer] Jeff [Mount] stopped us in the middle of our first song and said, ‘Please tell me you have more songs.’ ”

The original plan — to record a demo — was quickly shelved for recording a full-length. All 11 tracks on Inadaze were laid down in one 12-hour period. Hence the album’s title. “Since we did it in a day, it was in a daze,” Danny said. Partially improvised and recorded live in a large room, Inadaze is cheekily labeled by Moore as “all of your favorite music — right there!” Danny agrees, in a way: “We’re not trying to change the face of music. We’re not trying to invent a new style; just to make good music.” Material for a second, “weirder” album, according to the band, is being finalized. Dad couldn’t be more pleased. “When you’re a musician,” Mark said, “music is always that best friend that never goes away or does you wrong.”