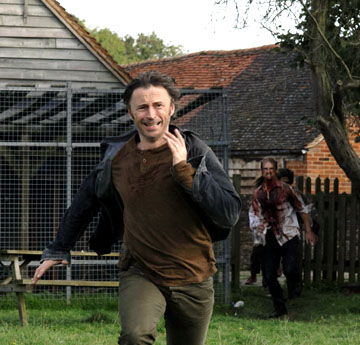 This may not seem obvious to us in the States. After all, Britain has one of the world’s healthiest economies, with systems of government and education that are emulated in far corners of the globe, and scientists and artists whose expertise and creativity are in constant demand. Yet if you look at the movies coming to us from across the pond, you’ll see little else besides presages of the country’s imminent collapse.

No doubt this reflects the intellectual exhaustion in the U.K. as Tony Blair’s government winds to its dismal end. The prime minister’s attempt to increase the nation’s post-9/11 global influence by backing the Iraq war has gone horribly wrong, and he has survived this long only because Britain’s Conservatives (much like America’s Democrats and, come to think of it, everybody else in the world) haven’t come up with any better ideas about dealing with the new world disorder. So the most resonant British movies are the ones catching the national discontent: The Queen carries an unmistakably bitter tinge in its depiction of Blair during his hopeful early days, and Children of Men convincingly delineates a near future of hopelessness, anarchy, and ruin. Hell, even Hot Fuzz, which is as exuberant and energizing as movies get, devotes itself to exposing the romantic ideal of the English country village as so much delusional nostalgia.

Now comes 28 Weeks Later, the sequel to the 2003 hit 28 Days Later. Danny Boyle’s original imagined Britain transformed into a wasteland of disease-ridden, flesh-eating zombies. The sequel does the same thing all over again on a bigger budget, so no points for originality. Still, it isn’t too much to expect the movie to work on its own generic terms. Even by that modest goal, 28 Weeks Later fails.

The sequel begins during the epidemic from the original film, in a rural hideout where Donald Harris (Robert Carlyle) and a group of uninfected people are discovered by zombies from a nearby village, who’ve been led there by a fleeing boy. Donald is separated from his wife during the attack and abandons her, thinking he has no hope of saving her. Seven months afterward, all the zombies have starved to death and he’s reunited with his children Tammy and Andy (Imogen Poots and Mackintosh Muggleton — what a Dickensian pair of names!) as the U.S. military helps them and a few thousand other virus-free Britons re-settle the island.

Of course, the re-settlement goes all pear-shaped (or is that bloody internal organ-shaped?) when another outbreak occurs, but does it have to happen in such a moronic way? Tammy and Andy indirectly bring it about when they defy the quarantine and sneak out of the military-controlled safe zone to retrieve some personal possessions from their old house, a move that’s off the charts in terms of bad ideas. The story’s riddled with holes such as this and multiple security lapses at the military base that are all too convenient for story purposes. The kids become the main characters, passing through the hands of various caretakers, including a brave Army sniper (Jeremy Renner) to a medical researcher (Rose Byrne) who thinks Tammy and Andy’s bodies may hold the key to quelling the epidemic. Donald reappears periodically whenever the filmmakers feel the urge to tie events together with some spurious treatment of the kids’ father issues.

It’d be easier to ignore these if director/co-writer Juan Carlos Fresnadillo were better suited to taking over for Danny Boyle. The Canary Islands native (best known for the dopey, demented 2002 Spanish thriller Intacto) contributes one really good sequence late in the film, when the medic tries to use a night-vision rifle sight to guide Tammy and Andy through a completely dark subway tunnel. The sequence is shot entirely in night vision, and the terrified kids with their eyeballs glowing bright green look every bit as alien as the zombies who eventually show up. Elsewhere, though, the director fails to scare us or to capture the texture of life in a rebuilding country, and he shows little talent for staging kinetic action sequences.

Of course, even if he did all those things, it might not have been enough. This movie is working with a losing hand. The fast-running, animal-screeching zombies are old hat by now, and the original film has since been superseded by better movies. Children of Men evoked postapocalyptic Britain in scarier, more exact terms, and Shaun of the Dead was funnier and more complex as an English zombie movie. The latter even drew out the weakness of 28 Days Later’s central metaphor (rage-infected monkeys, my ass). The lasting legacy of the original film appears to be Cillian Murphy’s acting career. Not a bad legacy, admittedly, but it’s one that 28 Weeks Later can’t hope to match.