Home Film Film Reviews Love Bug
SHARE
Facebook
Twitter
Purely from an intellectual standpoint, the existence of Bug tickles me. I love how it starts out as a kitchen-sink indie drama and then turns into something weirder and more menacing halfway through. 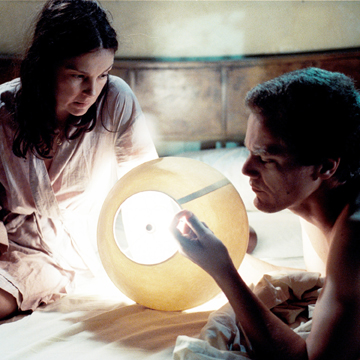 I also love that this pedigreed theatrical adaptation is being sold to the masses as a lowbrow slasher flick by the same studio that’s putting out the Hostel movies. This movie subverts every kind of expectations you might have, and I love that. What I’m not loving, sadly, is the movie itself. Based on Tracy Letts’ recent Off Broadway play, the film is set at a run-down motel on the back roads of Oklahoma, where Agnes (Ashley Judd) serves drinks at a bar to support herself and her drug habit. She’s haunted by the memory of a son who was mysteriously abducted some years ago. More concretely, she’s also troubled by a violent ex-husband (Harry Connick Jr.) who just got out of prison. The ex is probably just the latest in a string of toxic guys in her life, and the next man she meets tops them all. Peter (Michael Shannon) says he’s an Iraq war veteran, and then goes on to cast doubt on this and everything else he says by claiming that the world is controlled by microscopic machines that are spying on him and recording his thoughts.

It’s a measure of Agnes’ desperation for companionship that she stays with him anyway — dating a full-blown psychotic with paranoid delusions has many downsides, but one upside is that your mean, abusive ex suddenly looks as threatening as a yapping chihuahua. If Peter’s belief that invisible bugs are eating away at his body isn’t enough of a sign that he’s a big tower of crazy, there’s also the fact that he’s played by Michael freakin’ Shannon. You may not have seen this basso-voiced 33-year-old actor before, but you won’t forget him once you’ve gotten a load of his thousand-yard stare, which puts even Christopher Walken’s in the shade. He’s brought the insanity in Bad Boys II (crazy redneck), Cecil B. DeMented (crazy revolutionary), and Jesus’ Son (crazy heroin addict), but even when he’s playing a heroic role like the Marine rescue worker in World Trade Center, you fully expect him at any moment to grab a couple of guns and go on a shooting spree. Shannon originated the role of Peter onstage, and while he’s good and comfortable in it, the part’s static quality prevents him from bringing much modulation to Peter’s madness.

Opposite him, Ashley Judd does pretty well early on with Agnes’ dissipation, and there’s real despair in her voice when she tersely invites Peter into her bed: “Come here, boy.” It’s believable that a character with such a fragile psyche might succumb to Peter’s delusions, but Agnes’ rambling monologues later on prove to be too much for Judd to handle, and the setting reminds you that the actress gave a much better performance in a similar role in a genuine kitchen-sink indie drama that came out a few months ago, Come Early Morning. The director here is old hand William Friedkin, who has spent most of the last 15 years or so staging operas for many of the world’s big-time companies. He did such a skillful job creating tension in an enclosed space in The Exorcist, you’d think he’d do better at that same job here. Alas, he can’t distract us from the all-too-visible stage machinery when the film fast-forwards in time to track the two characters’ deepening folie à deux, with Agnes’ room suddenly filling up with insect traps and aluminum foil, until the only source of light in the room comes from bug zappers. These transitions would happen during act changes in a playhouse, and they’d seem natural enough in that environment. Here, though, they’re awkward and contrived. The attempts to “open up” the action with helicopter shots of the motel and intercuts of insects and microbes don’t work, either. The staginess contributes to a larger failing. Bug belongs to a long tradition of movies about insanity like Darren Aronofsky’s p and Roman Polanski’s Repulsion.

Those films use visuals, music, and sound cues to take us inside the troubled minds of their characters. This one, however, remains true to its stage roots and uses words and speeches to evoke Peter and Agnes’ dementia, and as a result we feel like we’re trapped in the room with these characters rather than sharing in their delusion. This approach is much less enlightening, and it grows particularly irritating in the climactic scene, when Peter and Agnes heatedly work out a whole cosmology centered around the imaginary bugs as a prelude to cleansing themselves in an extreme fashion. The denouement is supposed to be operatically tragic, and instead it’s just talky. It’s all too typical of this potentially fruitful but overly cerebral exercise. For all the characters’ attempts to keep the bugs away, it’s the movie that emerges as sterile.

Bug Starring Ashley Judd and Michael Shannon. Directed by William Friedkin. Written by Tracy Letts, based on his own play. Rated R.