Stealing a federal building intended for Dallas and getting it built in Fort Worth instead was a major coup for then-U.S. Rep. Jim Wright in the mid-1960s. 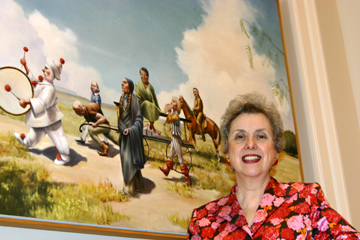 Wright relied on his political clout in Washington to secure federal funds and plop the 14-story Fritz G. Lanham Federal Building in downtown Cowtown, earning him accolades from the folks back home. “I was so proud of the federal building,” the former speaker of the U.S. House told Fort Worth Weekly recently. At the 1968 grand opening of the building, however, Wright managed to annoy some of those same constituents. A large mural had been commissioned for the main lobby, and Wright’s jaw dropped at the first look.

Seymour Fogel’s modernist painting made no sense to someone who preferred art with Old West themes. “I heard they paid $35,000 for this painting, and it was a painting of nothing, just a bunch of colors to me, and it didn’t mean anything,” Wright said. “I’m for realistic art. I want it to look like it’s supposed to look.” Wright shared those views with a reporter, who printed them. The congressman quickly learned that Fort Worth’s art community was more open-minded than he was. Local artists from the 1940s were among the state’s most innovative and daring.

One artist in particular — Wright thinks it was Beth Lea Clardy — told him, “Why don’t you just say nothing and not expose your ignorance.” Recalling the story now makes Wright chuckle. And while his opinions on art haven’t changed much since then, he and many others are excited that one of Fogel’s small-scale studies for the mural is now hanging in the downtown Fort Worth Public Library. The Fogel estate made the donation — it’s only fitting that the painting hang in the library, one of its leaders said. After all, “from the beginning in 1901 the library was a pioneer in bringing the fine arts to Fort Worth,” said Austin collector Robert Summers, who oversaw the donation. Most locals are thinking of museums like the Kimbell, the Modern, and the Amon Carter when they brag about the city’s culture these days. Most have forgotten that the downtown library was once the be-all and end-all for public displays of fine art. “It was the first public venue for art in the city,” said Betsy Pepper, executive director of the Fort Worth Public Library Foundation. In the 1890s, a group of women led by Jennie Scott Scheuber was hellbent on bringing culture to this frontier town, and books and art seemed the perfect elixir. 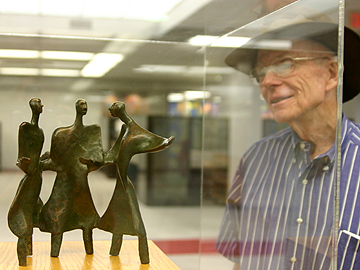 They convinced philanthropist Andrew Carnegie to spring for $50,000, and the Carnegie Public Library of Fort Worth opened its doors in 1901 at the intersection of two dirt roads — West Ninth and Throckmorton streets. The library came with its own art gallery, but the walls remained bare for a while. Local art collector and historian Scott Grant Barker’s research on the library’s collection revealed that a cast-paper sculpture of Hermes, the son of Zeus, became the first permanent fixture for display in 1902.

Two years later, a group of Fort Worth women raised $2,000 and gave the library its first major painting, “Approaching Storm” by George Inness. A loaned exhibit from the American Federation of Arts prompted creation of the Fort Worth Art Association in 1909. This group promoted local artists and helped establish the library’s reputation as an exhibit space for major American artists. Downtown business leaders, prodded by the determined Scheuber, anted up $650 to buy the Thomas Eakins painting “Swimming Hole.” They probably never dreamed that the painting, which hung on the library walls and was frequently ogled and handled by locals, would sell for $10 million in 1990 and be moved to the Carter museum.

Some of these same business leaders later organized as the Friends of Art and continued raising money for art acquisitions. Each year, the library gained at least one notable painting for its permanent collection. In 1938, the library was demolished over Scheuber’s strenuous objections, to make way for a larger, more modern library. The next year, the new Fort Worth Public Library debuted with its largest show ever — more than 90 works by area painters and sculptors, Barker said. In the ensuing years, an annual juried competition was held, and the winning painting was purchased and kept for the Fort Worth Art Association’s permanent collection. By the 1940s, the library’s role in embracing local artists had helped motivate a new generation’s movement toward modernist experimentation. These artists, later known as the Fort Worth Circle, were “the most progressive group of young artists in the state,” Barker said. The library was the city’s focal point for art throughout the first half of the 20th century and a popular gathering spot back in the days before television, video games, and suburban sprawl. But a decline loomed. The Fort Worth Art Center (later to become the Modern Art Museum of Fort Worth) debuted in 1954 and became the new home to paintings purchased by Friends of Art.

Meanwhile, wealthy entrepreneur Kay Kimbell had used the downtown library’s gallery as a place to share his impressive art collections with the public. After his death, his will called for the construction of a museum in his name, and his art was moved there. “From the 1960s on, the library did not have a meaningful art collection,” said library foundation board member Morris Matson. “At the same time, the library was outgrowing its facilities, and the city initiated plans to build a new library at a new location.” The new library opened at 3rd and Taylor streets as an underground facility in 1978 but contained no art gallery. Shortly after opening, the building began leaking during rains, said Matson, who was acting city manager at the time. The number of leaks grew, eventually reaching 101 by actual count. Plastic buckets were used to catch the water drips, and the library staff served as a bucket brigade during downpours. “By 1990, the place was a disaster,” Pepper said.

At the suggestion of a local architect, city leaders decided the best and least expensive method of stopping the leaks was to build a ground-level building on top of the underground library, serving in effect as a large umbrella. The city paid to build the street-level addition in the early 1990s, which stopped the leaks. But there wasn’t enough money to finish out the building’s interior. Pepper was the sparkplug who started the Library Foundation in 1993, and the nonprofit organization raised $5 million to pay for walls, furniture, stairwells, and other finish-out projects. “It took us five years,” Pepper said. “We were novices, but we did it, to the amazement of many.” The new addition opened in 1999 and included a 6,600-square-foot gallery space funded by the Library Foundation. The library was again ready to become the people’s art gallery. All it needed was art.

During the library’s 2001 centennial celebration, Pepper decided to stage an art exhibition — the first in many years at the library. She and the Collectors of Fort Worth Art tracked down paintings by artists who had originally exhibited at the library, and featured them in the 2001 show, “First Light: Local Art and the Fort Worth Public Library 1901-1961.” Now the foundation is working to once again establish the library as a relaxing place to view local art and as a gathering place for the community. To create this atmosphere, the foundation is improving the public address system and buying a podium and furniture. “It’s possible that these gallery upgrades will be completed in six to nine months,” Pepper said. The Fogel estate’s donation of the modernist study, along with other gifts by local art lovers who have provided important works, is once again helping the library do what those resolute women from the 1890s envisioned — pass along some culture. “The library’s collection is minimal,” Pepper said. “The foundation has about 25 pieces, but it’s growing.”