Home Music Music Feature Wayyy Back Home
SHARE
Facebook
Twitter
The five members of the Fort’s hyper-melodic and grooving Green River Ordinance are all in their early 20s, and three of them dropped out of college (at TCU, UTA, and TCC) last year. 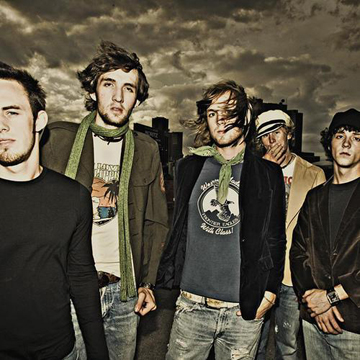 Not a decision you’d think the parental units would approve of, except that for the past 18 months, the GRO guys haven’t been lounging on their girlfriends’ couches, chugging Red Bulls, and shooting down video-game enemy combatants. They’ve been, to say the least, busy: opening for Bon Jovi, Collective Soul, Blue October, and Cross Canadian Ragweed among others; touring all over creation (or at least 40 of our 50 states); and doing the delicate dance with a couple of major labels. Guitarist Jamey Ice doesn’t fool himself into thinking that they’re rock stars. But musicmaking hasn’t left them any time to formulate a fallback plan. “We’re just trying to take it slow, so we can build a base before we sign anything with a major label,” Ice said, effectively summarizing the attitudes of vocalist and guitarist Josh Jenkins; bassist Geoff Ice (Jamey’s little brother); rhythm guitarist and singer Josh Wilkerson; and drummer Duncan Hunter. “We’ve heard the stories about bands that get signed and nothing gets released or promoted. But so far, we feel like we’ve been blessed with the connections we’ve made.” Earlier this year, Green River Ordinance released its sophomore disc, Way Back Home, a five-song e.p. that finds the proudly uptempo quintet in a more reflective, even melancholy, mood.

It was recorded in December 2006 after about six months of non-stop touring. Sales of the previous release, The Beauty of Letting Go, as well as GRO-related paraphernalia, allowed the band to get a loan to buy a 15-seater van and a trailer. True to GRO’s generally non-pompous attitude, the van has been christened Lambchop — a stuffed version of the lovable kids’ puppet sits on the dashboard. Lambchop has taken the boys to New York, Los Angeles, Chicago, Boston, and up and down the Midwest. They’ve played to empty clubs and packed theaters as well as various showcases for corporate A&R types. “Touring has fun moments and a lot of very, very hard moments,” Jamey Ice said, sounding weary from the thought of it. “What’s funny is, most of us didn’t grow up listening to country music. But when we were in California or New York, we really wanted to hear Texas music. We listened to Pat Green like crazy.” Speaking of hard times, in January, GRO had to navigate Lambchop through a particularly stormy, withering-cold Chicago. “We were these Texas boys trying to deal with temperatures in the negative-30s,” Ice said. “We had only packed our jackets. We didn’t go outside when we didn’t have to.” Later in Los Angeles, they knocked off some tunes with engineer-producer Greg Collins, who helmed a couple of U2 albums.

The ostensible goal was to create more recorded material that labels could hear. All during the hot and cold months, GRO’s manager was dealing with attorneys and agents and trying to get a contract with a “music supervisor,” the kind of insider who could get a Green River Ordinance song prominently placed in an episode of, say, Grey’s Anatomy or Scrubs. “There’s so much talk about the decline of c.d. sales,” Ice said. “I guess that [song placement] is the new way for record companies to make money.” GRO’s plan for summer is to rest, recuperate, and write. They will play only a handful of shows over the next three months. Most of their time will be spent writing and recording new material. Come fall, the band will start another national tour, this one concentrating on college campuses and a few high schools. Ice hopes that by then something will be firmed up as far label and publishing contracts go. He said that between The Beauty of Letting Go and Way Back Home, GRO has sold about 10,000 c.d.’s. He sounds a bit bewildered even as he relates this: “People bought it in places where we thought nobody knew us, and they didn’t know us where we’d done a lot of promotion.” However, Ice — even after having been to Chicago in the freezing cold — admits that selling 10,000 c.d.’s is nothing to, um, sneeze at.