Home Music Listen Up Fair to Midland
SHARE
Facebook
Twitter
During the first notes of “Dance of the Manatee,” the opening track on Fair to Midland’s new disc, Fables from a Mayfly: What I Tell You Three Times is True, the Texas band states its clear intent: to be extremely, umm, intense. 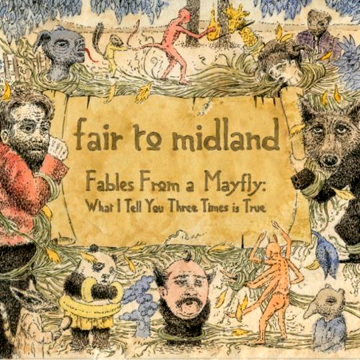 Perhaps the four Fair to Midlanders’ serious dedication to prog-metal is what attracted System of a Down frontman Serj Tankian to make them first signee to his new Serjical Strike record label. Tankian co-produced the disc with David Bottrill (Tool, Muse). After 10 years, the band members anticipate one another’s moves, a mind-boggling skill that no doubt helped land them spots on the Coachella Music Festival bill and tours with hot alt-metal outfit Flyleaf and Japan’s insane Dir En Grey. Epic tunes highlighted by singer Darroh Sudderth’s expansive range characterize Fables, even if the omnipresent buzz of one of the band members’ going off on his own little musical mystery tour occasionally detracts from Sudderth’s sincerity. Cliff Campbell wrings creative tones from his guitar — and a whole lot of ’em. His anarchical playing seems to undermine Sudderth’s search for serenity. There’s pretty much only one part of the album in which Campbell lets up enough to let Sudderth shine: the final track. Keyboardist Matt Langley sort of saves the day. In experimenting with different sounds and tacks, he gives every song a unique feel. The rhythm section of drummer Brett Stowers and bassist Jon Dicken has a slick precision (courtesy, no doubt, of Bottrill’s direction), keeping Fables from a Mayfly from straying too far away from mainstream sensibilities and into purely experimental — and un-sellable — territory. Regardless, Fair to Midland is still incredibly imaginative, and Fables from a Mayfly manages the neat trick of being aggressive without frothing at the mouth.-Caroline Collier