Home Music Music Feature Moonlight Drive — and Ambition
SHARE
Facebook
Twitter
The 22-year-old singer-songwriter who prefers to be known only as Sierra (or, better yet, Sierra Lives on the Moon) feels very old. 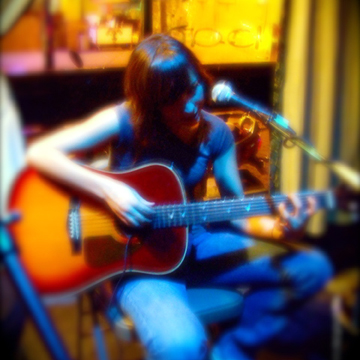 More concerned with the fact that we can die at any time rather than our actual number of years on Earth, the gypsy-ish, captivatingly raw chanteuse likes to muse about the annoying discrepancies between the Big Picture and the details. “All the parts of my life are like this,” she said. “From the clouds, it looks good. But from the ground, it’s messy.” In her short time on the planet, Sierra has arguably covered more ground than most folks twice her age. A native of Fullerton, Calif., she did most of her growing up in Fort Worth, with her parents and brother and sister. Ditching her small Lake Worth private school at age 12, she became a modern-day nomad, traveling the world as a missionary for Kenneth Copeland Ministries. With KCM and another missionary, she spent a few years visiting Africa, Mexico, Australia, and Europe — basically, anyplace where a church would finance her burgeoning career as a naturally gifted cantor.

She began singing at a very young age and displayed an extraordinary facility with even the most circuitous Latin hymns. When she was 15, a tent revival in Burundi convinced her of her inherent power to sway other people’s hearts with her music. “I was singing along with a piano player, and I had my eyes closed for about 10 minutes,” she said. “When I opened them, everyone was on their face.” Someone recorded the service, and portions of it played on a local radio station. When the missionaries showed up for a repeat performance the next day, “It was flooded with people.” (All due respect to Sierra, but the Burundians, as she discovered later, must have confused the station’s proclamation of a performance of “Maria: Kyrie” [otherwise known as the Assumpta est Maria: Kyrie eleison] with “a surprise performance by Mariah Carey.”) As she spent more time traveling to spread the Good News, she began to fiddle with her brother’s Stratocaster and write her own songs. A growing uncertainty about her belief in her mission started causing anxiety attacks. While in a Romanian hotel with access to the church guitar, she reached a breaking point. “I could write songs about anything except about what I was living for,” she said. “I got on my knees and said to God, ‘If you want me to live for you, give me a song.’ I got nothing.” She said that her open vacillating got her tattled on. “So I got kicked out [of the missionary].

But it was fine, because I wasn’t a virgin and didn’t believe in Jesus anymore. I’m not bitter, though.” Shortly after her unanswered prayer, Sierra became an atheist, and writing songs became much easier. Her mother supported the life that her daughter had chosen. Sierra recalls her mother’s warnings: “‘Don’t write your music when you’re stoned, or you’ll turn out just like John Lennon, thinking you’re God. Your music is going to be good, but you’re not God.’ ” Sierra returned to the States and to Fort Worth in 2002 but continued her whimsical, migratory life. Almost as soon as she returned home, she moved to Arizona to work for Dead Vinyl records and delved deeper into the technical components of musicmaking, especially the intricacies of the guitar. “I accidentally became technical with [the guitar], because I was so bad,” Sierra said with a laugh. “I developed a weird, classically derivative style. I didn’t realize what I was doing.” Now back in Texas, Dallas, specifically, Sierra has been concentrating on her music as a career. “The time to be a tortured artist, though, is over. I want to make money and have a family, and music is the only thing I can do without trying really hard.” Sierra’s hard work is now culminating in her current recording project at Deep Ellum Studios, with her best friend, engineer Craig Smith.

Claiming pop singer Ryan Cabrera as his “previous claim to fame,” the knob-twiddler believes Sierra to be his “golden ticket” now. Her forthcoming album, tentatively titled Information Station, continues to build in the Deep Ellum digs. Although she has recorded 20 songs, she said there are only four that she “would be comfortable selling.” Ideally, Sierra would prefer not to record her emotionally charged, bare acoustic compositions. “Every time I play my songs, they are different,” she said. “It’s not that I’m scared of commitment, just closure.” Freely admitting that she is “a little bit crazy,” Sierra understands her tendency to cloak harsh or revealing sentiments in cloudy metaphor. “I’ll write something flowing instead of the truth. Exposing yourself makes you feel weak as a songwriter. You’re taking a real big chance, and I don’t like to take chances. I don’t want to jeopardize anything real by sharing it with anyone else.” A few chances she is willing to take, however, include singing about childhood pain, failed relationships, insanity, and even bloody nightmares. Sierra also went through a “drug spell,” which did nothing but add more years to her life. Now “mostly sober,” she finds herself writing lighter material than ever before, even though it’s “10 times harder.”

As she continues her journey inward, she splits time nomadically among Fort Worth, Dallas, and Vancouver. Working part-time as an assistant for several video production companies, Sierra also joins Deep Ellum hip-hop acts onstage, plays with aging hippies in Vancouver, and lends her voice to the work of other up-and-coming singers, most notably Austin’s Drew Nix. Success is definitely the goal, but Sierra wants to do it her own way. Preferring never to be signed to a major label, she would one day like to return to the third-world countries where she first fell in love with the power of song — anywhere far away from the anxiety and pretension she finds in the American club scene. Sierra sometimes avoids playing in hometown clubs due to a nervousness she feels about adhering to certain expectations. “Here, giving anything is hard unless it’s provoked by anger,” she said. “I’m trying to get out of having anger as a motivator, and I know I channel my anxiety into anger. I swear, I’m a rather happy person, and as long as I come correct, that’s all that matters.”