Golf, like poker, is a deliberative sport that demands grace and calm under pressure. 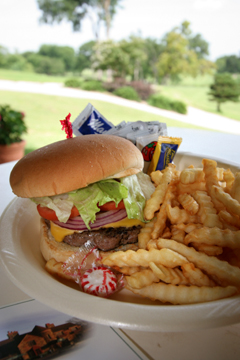 Odd then that it has gained a surprising number of new enthusiasts among upwardly mobile twenty- and thirtysomethings. They’re supposed to be fine-tuning their quick reflexes playing video games, right? Not emptying their minds and concentrating on single tasks like sinking putts or avoiding sand traps. Based on anecdotal evidence alone, most of the other country clubs in town have as many non-retirees as retirees as members. So think of Hawks Creek Golf Club as an exception. Go there any afternoon, and you’ll see a lot of gray-haired men whose mouths are occupied by fat stogies, whose skinny thighs are covered in madras shorts, and whose butts leave the motorized golf carts only to hack at some balls before sitting back down.

The Westside club opened five years ago as a place, by all indications, for codgers and young bucks alike. But the links — and the grill — tell a different story. Inside the dusty brick, faux-Scottish castle that is the club’s center, there’s a small bar and grill loaded with old standbys, all made on the spot and all utterly — and tastily — offensive to the diet-conscious. Hawks Creek’s breakfast burritos, fries, hot dogs, and chasers of light beer, Bloody Marys, and Red Bull-and-vodkas are not definitive, but they’re definitely better than the fare at most other recreational sites. Hawks Creek’s bacon-cheeseburger was simple but flat-out delicious. Store-bought buns hugged all-beef patties cooked medium-well, with savory American cheese slices simmered right into the meat. The bacon was crisp but just fatty enough. The fries were of the kind that used to be known as “crinkle-cut,” deep-fried and golden-brown and in the best, most mouthwatering way. Each fry was dry and crunchy on the outside. Then you bit down and discovered a slender core of hot, delicious greasiness inside. The hot dog was served plain, also on a store-bought bun, except the dog wasn’t a limp, traditional “hot dog” but a hot link: a fat, firm, round, 100-percent pure-beef, tubular delicacy, with a dark-red speckled color that perfectly indicated the robust flavor and juiciness inside.

The egg sandwich was ordered late in the afternoon, and the chef warned that it might not be breakfast-fresh because the grill had been used throughout the morning and lunch. No matter. Four thick, hard-fried sunny-side-ups arrived squeezed between that fatty bacon, American cheese, and two grilled pieces of wheat bread. Contrary to the chef’s protestations, the delight may have been even more flavorful as a result of association with the grill’s other great products. Hawks Creek Grill is sort of like a scrumptious burger-and-fries stand but one that sits inside a fake castle surrounded by tees and greens and that doles out Red Bulls and vodkas along with Big Reds and Sprites. One question, though: Which improves your swing better — the grilled beef-and-cheese, the Russian grain liquor, or all of that B-12 and caffeine? Only the hardcore Hawks Creekers can say for sure.