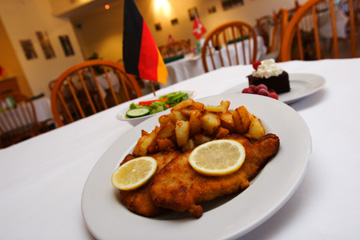 Co-owners Vlatka and Peter Grunewald have instituted a moratorium on kitsch. No beer steins, lederhosen, or accordion music. There’s nothing wrong with folk culture, of course, but too many purveyors of regional and ethnic cuisines wind up stockpiling so many artifacts and memorabilia that the place looks like a roadside Stuckey’s from the owner’s country of choice. Greenwood’s has white walls, white tablecloths, and a handful of tasteful photos of German architecture. The Grunewalds are pursuing bigger game than a camped-up nod to European sensibilities: They want to bring serious, flavorful, hand-prepared German cuisine to a city that’s been sorely lacking it. All the ambassadorial work ends up on the plate, and Fort Worthians — especially fans of hearty, carb-rich fare — should be grateful. The dish known as weisswuerste (translated into English as “white sausage”) originated in Munich and is apparently considered by some as the national dish of Bavaria: plump, tan parsley-flecked links with a sumptuous, almost silken flavor that is difficult to place. Turns out — PETA, beware — it’s around 70 percent ground veal. Ethical issues aside, it was delicious. The wurst came with German-style potato salad — that is, with a zesty, dill-fired oil-and-vinegar treatment, rather than mayonnaisse, and served warm.

Schnitzel (fried meat cutlets) is one of Germany’s most famous meat dishes, even though most Americans like to joke about it rather than eat it. Greenwood’s serves a spiffy schweineschnitzel: lightly breaded pork tenderloin so supple that it gracefully surrendered on the first chew. The menu identifies it as “Vienna-style,” which means the unobtrusive breading was made of egg yolk, flour, and bread-crumbs. The side dish was cubed, deep-fried potatoes, pleasantly chewy on the outside and moist and fluffy on the inside. The sauerbraten was medium-thick slices of marinated roast beef served in a thin brown sauce that somehow heightened the brawny beef flavor. That heavenly Germanic version of pasta, spaetzle (egg noodles) came in thick, comforting squiggles generously heaped on the plate. Indeed, it’s so pleasurable in texture that it’s dangerous — after just three or four fast forkfuls, you feel like an obese, decadent burgermeister. The moist, shredded accompaniment of red cabbage was tender and had a smooth, satisfying flavor completely devoid of sauerkraut’s traditional vinegar bite. That’s just another measure of the high standards operating in the Greenwood’s kuche: They can make freakin’ cabbage taste like comfort food.