Nearly half a century ago at Baylor University, newcomer soprano Beverly Sills gave a recital, and afterward an eager fan asked to be sent an autographed photo. 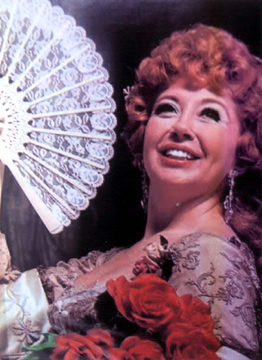 The admirer planned to write down her address on a piece of paper. Sills said she’d be happy to cooperate but had no place to put the address. Someone suggested that she tuck it into her magnificent bosom. Without missing a beat, she looked down and said, “I don’t know how magnificent it is, but they’re the right number.”The down-to-earth diva passed away last week, and, while she hadn’t performed live in almost 30 years, memories of her performances remain vivid for a lot of local opera lovers. Fort Worth was one of several places where the young Brooklynite honed her skills in the 1960s and ’70s. Most of her stops were in the States rather than abroad. She didn’t blow your wig off with high-voltage power; hers was a light, clear, lyric sound. But she had amazing command of coloratura technique: scales, skips, arpeggios, trills, the whole arsenal of showstoppers delivered faster, and cleaner, than any other singer. And she wed her technical skills to the needs of the music.

She made her debut with the Fort Worth Opera in the title role of La Traviata. She later sang Constanza in Mozart’s Abduction from the Seraglio, the title role of Lucia di Lammermoor, and Rosina in The Barber of Seville, as well as a strange double bill of Von Suppe’s The Beautiful Galatea and Leoncavallo’s Pagliacci. I saw the double bill, which was surprisingly good, and told her later how strange a choice it seemed — she was never associated with blood and thunder verismo opera. “It was fun,” she said. “But if you think that was strange, you should have heard my Aida.” Aida?! I couldn’t imagine her wrestling with that heavy, dramatic role. A comedy of errors ended in her singing the role in Central City, Colorado. Sills had a great relationship with Fort Worth. When the diva was preparing for her Metropolitan Opera debut as Lucia, opera’s ultimate coloratura role, she still hadn’t sung the piece. FWO general director Rudolf Kruger invited Sills to debut it here. “I needed a place away from New York to try it out,” she said at the time. “And Rudy always built great shows around me, so I said yes.”

The performances are probably the highlight of the company’s history. Sills was vocally in a league of her own. In her prime, her voice would do anything she asked, and her dramatic instincts were among the best. The Mad Scene, in particular, was a memorable tour de force. She wandered among the cowering wedding guests, dagger in hand, nightgown splashed with blood from her dead bridegroom, dementedly singing of betrayal and lost love. Sills returned near the end of her career for Barber of Seville, a performance that amounted to a gift for the company. Her fee had become astronomical, but she sang here at the old rate. “Rudy invited me to sing when few companies would hire me,” she said. “I owe this company a debt, and I pay my debts.” The sold-out performances were a windfall for FWO. Sills also sang The Merry Widow at Casa Mañana and was convinced that the main tune, “Vilia,” was jinxed. “We had an electric storm one night, and just as I started, the lights went out and the orchestra stopped. The musicians couldn’t see their music. I didn’t know what to do, so I kept on singing. It was a bizarre feeling, singing alone in the dark, but the audience loved it.”

In those days, swarms of June bugs used to inundate Fort Worth every spring. The beetles could get two inches deep downtown on West Seventh Street from sidewalk to sidewalk. Sills had a horror of bugs. “Even ants give me the willies,” she said. One night, again as she was starting “Vilia,” a beetle found its way into the theater and onto the hem of her gown, although she didn’t see it. An alert chorus boy, aware of her phobia, saved the day. Ad libbing, he came up to Sills, waltzed her around, gave an exaggerated bow, and scooped up the offending bug as he retreated back to his place. “I thought that was pretty pushy, coming up to dance in the middle of my big aria,” she said. “Then I saw what he had done, and I was so grateful. If I’d seen the thing first, you would have heard my shrieks all the way to Dallas.” Sills was as open and pleasant offstage as she was on. She chatted freely with stagehands, wardrobe people, chorus members, anyone who was there. And she remembered names — and conversations — two seasons later, inquiring about family health and everyday happenings. Her people skills prefigured her national persona. At one point, she had her own tv talk show and occasionally sat in as guest host on The Tonight Show, the only opera singer ever invited to substitute for Johnny Carson.

We had lunch in San Diego once when she was singing there, and afterward we shopped together in the city’s Old Town. By then her signature red hair and baby face were well known. It seemed every two minutes someone came up to visit, to thank her for being there or for her wonderful singing, to ask for an autograph, or just to bask in her presence. She was always gracious, and it was obvious that she enjoyed the fuss — that it was a joy, not a chore, to give more than take. All of which opened up a new career when she retired at the age of 50. (The top of her voice gave out. “They told me this would happen,” she said. “But I can still hit the notes. I just can’t hang on to them. I didn’t know it would be like that.”) She took on the general directorship of the New York City Opera and then became CEO of the entire Lincoln Center complex in New York. In the end, she gave that up to assume the chair of the Metropolitan Opera. The last had an ironic flavor. The Met resisted presenting the kid from Brooklyn until well into her career. Sills nevertheless raised millions for the company, as she did for all the arts. With her unpretentious, easygoing personality, she charmed business leaders, socialites, and everyday folks into sharing her vision and contributing to the cause. Opera was her love, and she helped make it more secure for generations to come.