Touring productions of theatrical staples such as Camelot and Sweet Charity guarantee that local ticketbuyers will always be able to escape the daily grind, even if only momentarily. Nothing wrong with that. We all need happy diversions to help us forget about real life for a while. 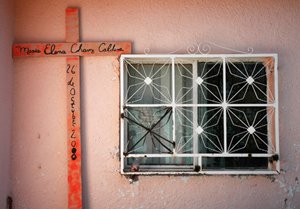 But for some politically charged theatrical artists, not doing anything is tantamount to collaborating with all of the villains who daily act out crimes against humanity. For some such artists, the stage is solely a venue for framing ugly issues, in the hopes of raising awareness and effecting change. A perfect, mind-boggling example of injustice is the murder and/or disappearance since 1993 of nearly 500 women in the border town of Juarez, Mexico, just a few short miles across a trickle of river from El Paso. Juarez is a dusty, poor, desert city full of maquiladoras, foreign-owned factories that bottle soft drinks, make shoes, and spin textiles for the rest of the world. The vicious killings of female laborers — generally between the ages of 15 and 21 but some as young as five — have been an unending phenomenon there, with apparently little interference from the Juarez police or city leaders.

Vanessa Mercado Taylor, founding artistic director of the Fort Worth-Dallas theatrical troupe MoMentuM Productions, was first introduced to the Juarez story when she worked on a TCU production of Eve Ensler’s The Vagina Monologues in 2004 that was also a fund-raiser for Nuestras Hijas de Regreso a Casa (May Our Daughters Come Home). The Juarez-based organization is dedicated to providing legal, financial, and therapeutic assistance for surviving family members. “We took two trips to Juarez,” said Taylor, of the MoMentuM troupe that included only two native Spanish speakers — she and her mother, Gabriella Mercado. “We did individual interviews with mothers and sisters in a restaurant. Some said the police were involved [in the family members’ deaths]. Others said they weren’t. The scary thing is, it doesn’t seem to be any kind of formal conspiracy. It’s not like one serial killer stalking Juarez women. The murders are all so different, most investigators think they’ve been committed by a lot of different killers.”

Out of this intense experience came Las Mujeres de Juarez (The Women of Juarez), MoMentuM’s multi-media evening of recorded sound, video, photos, and theatrical interpretations of eight individual stories culled from the interviews. Taylor calls it the most collaborative theatrical piece of the four that MoMentuM has so far produced. Writers and actors, she said, threw everything into the pot to get it simmering. One of the things they agreed upon: No one in the show actually assumes the role of a victim or a family member. Instead, they present the stories of the victims and relatives straightforwardly as if they were reciting actual tranDELETEs. Traditional and non-traditional narrative devices are used. The catalog of horrors in the Juarez saga is gruesomely theatrical. Besides the young women who were raped, and beaten or stabbed to death, others were drowned in paint thinner, submerged in barrels of wet concrete, burned alive, or left for dead with their bodies placed in crucifixion shapes. But Taylor tries to keep her focus on the culture that produced the killings, rather than the details of the deaths.

“Border towns can be dangerous places in general,” she said. “But there’s also a high level of machismo that operates. Women have no place to go if they’re abused at home or work, and they’re often the lowest paid at the maquiladoras, where everybody gets low wages. They can’t afford their own cars, so they have to walk in the early morning and late evening hours through desert areas. Many women told us they’re as afraid of the bus drivers as [they are of] the police.”
And although Taylor and MoMentuM drew from an exclusively female well for Las Mujeres de Juarez, she notes that many of the men in Juarez are suffering, just more silently. “In general, Hispanic men don’t open up emotionally to strangers,” she said. “But the wives and the daughters told us: Many of the men feel shame and guilt [from the deaths] because they consider themselves the protectors of the family, and for them, this means they failed.”

The upcoming production of Las Mujeres de Juarez is a fund-raiser for May Our Daughters Come Home. Although the advocacy group has received considerable patronage from Eve Ensler and Amnesty International, the group, according to Taylor, continues to suffer from attempts by Juarez to intimidate them and obstruct their work. The headquarters were ransacked during one of MoMentuM’s visits, and computers and files were stolen. The group suspects the perpetrators were from the Juarez police. Taylor said she hopes the show by MoMentuM will provide another external, positive influence in a very insulated border ciudad. “The survivors aren’t even allowed to honor the dead,” she said, citing a famous plot of land in the center of Juarez where many pink crosses have been erected. “That field is covered with weeds, so you can’t even see the crosses,” Taylor said. “There are huge stones you have to climb over to get to it. Some of the crosses have been trampled. Believe it or not, we want to end our show on a positive note. We want to show the value of their lives by discussing their deaths.”-Jimmy Fowler