Home News Metro Put Down that Beer and Step Away from the Walker
SHARE
Facebook
Twitter
Nobody accuses Dee Cantrell of being a shrinking violet. She’s more likely to be compared to bull nettle — brush up against her too hard, and you’re liable to be left smarting. So when the Haltom City resident got carded while trying to buy beer at a local Wal-Mart, the war had begun. 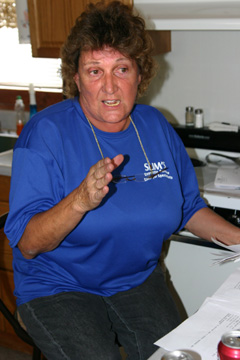 These days, more and more stores are demanding identification from anyone buying beer and wine, and some customers — including Cantrell — are unhappy about it. “That’s the way most retailers are going,” said Sgt. Charlie Cloud of the Texas Alcoholic Beverage Commission’s enforcement division. “They’re trying to be cautious and make sure the law isn’t violated, and their people are checking IDs.” Getting snagged in the paranoia are folks such as Cantrell, who has degenerative arthritis, an ever-present pair of glasses on a chain around her neck, little patience for fools — and 72 years under her belt. “I flat take umbrage at them even asking me for my ID,” she said. Umbrage led to outrage, toe-to-toe debates with store employees, a phone call to Wal-Mart headquarters, a letter of complaint to the state attorney general, a call to a senator, and, finally, victory. Cantrell received an apology and a $50 gift certificate.

Funny thing is — the store was within its rights, if nowhere near what would seem reasonable to most folks. “The store has a right to refuse service to anyone, and they have a right to request your ID,” Cloud said. Some area retail stores have begun asking all customers for a state driver’s license as identification before selling alcohol, even those who are obviously over 21 — a policy known as universal carding. Some have installed automated systems that require cashiers to enter a date of birth during an alcohol transaction. The cash register automatically does the math and determines if the customer is old enough. “We’ve started calling it, ‘Carding Grandma,’” said a manager at a local Sack’n Save, who asked not to be named. When mature customers complain, the clerks call the manager, who scrutinizes customers to determine whether they appear old enough to be exempted from showing ID. “Only I can override the policy,” he said.

The store has tightened its rule in response to the TABC’s more stringent enforcement of laws forbidding the sale of alcohol to minors, he said. A first violation can result in a retailer’s alcohol license being suspended for up to 20 days. A second violation can strip a store of its license for up to 90 days, while a third offense can mean cancellation of the license. Also, an employee found to be selling alcohol to a minor can be hit personally with a fine of up to $4,000 as well as up to a year in jail. “The retailers are protecting themselves,” the store manager said. “It’s a major offense. You could lose your license to sell beer or wine.” Still, insisting on universal carding, regardless of a customer’s age, and then blaming TABC is a stretch, Cloud said. “If you have a 70-year-old in there asking for beer and you’re not selling them beer, that’s a cop-out,” he said. “Sometimes we lose the common-sense factor. If customers look like they need to be ID’d, then ID them. If they obviously look old enough, sell them the alcohol.”

When teetotaler Cantrell went to Wal-Mart and tried to buy two six-packs of Coors, she was already a little embarrassed. Cantrell said she doesn’t drink or smoke and isn’t comfortable purchasing those items, but was doing a favor for a friend (66-year-old Yvonne Roth). Getting carded caught Cantrell by surprise. When she asked why the store would card an elderly woman, the clerk told her that a new state law required the checking of everyone’s ID, no matter their age. Not true, at least not in Texas. The trend toward universal carding and tightened store policies is leading to confusion and misinformation about the law, TABC spokeswoman Carolyn Beck said. “I get phone calls and e-mails from people saying they’ve been told it’s the law,” she said. “People are frustrated because they don’t want to be carded, and they don’t want to be given wrong information.”

The confusion might have been prompted by Tennessee’s law change, which went into effect this month, requiring universal carding of anyone buying beer in retail stores. Tennessee is the first state to enact such a law, and supporters say it will prevent clerks from having to guess the ages of customers, thereby reducing underage drinking. After the law was passed, Comer Wilson, a 66-year-old Tennessean with a long white beard, was carded while buying beer. He told the Associated Press, “It’s the stupidest law I ever heard. You can see I’m over 21.” Cantrell views the trend as “Big Brother” trying to pry into customers’ personal lives to get information that can be used for marketing or tracking purposes — and trampling on the U. S. Constitution in the process. “With the identity theft crisis we have these days, don’t even ask me for that stuff,” she said. She left Wal-Mart unsatisfied with the way she’d been treated by the clerk and store managers. She called a district manager, who apologized for her discomfort and sent her a $50 gift certificate, even though the store had done nothing illegal, and the clerk was following policy. Given the trend among merchants, it looks like Texas is heading for a long season of upset older booze buyers. But common sense and justice had triumphed, at least in her isolated case, Cantrell said. “They knew they were wrong even if they were in the right,” she said.