Home Film Film Reviews Problem Kids
SHARE
Facebook
Twitter
It’s fun to extol good movies and trash bad ones, but an awful lot of stuff falls in between those poles. 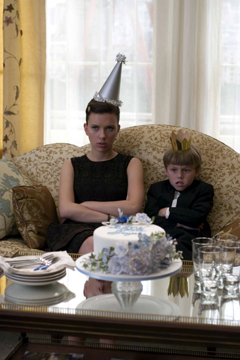 So it happens with all three of the films in this week’s roundup. If you find yourself at one of them, you’ll probably leave the theater shaking your head and wondering why that didn’t work out better. As frustrating as films like these often are for casual viewers, for a serious moviegoer they’re chances to learn something. Let’s see what we know after seeing these films that we didn’t before. Journalists who become filmmakers sometimes think that their former profession is an inherently interesting subject for the movies. The world of journalism is full of great stories, but even a great story needs to be properly handled when it’s translated to celluloid. You can’t just write and direct it in a foursquare style and expect audiences to be automatically glued to the screen.

Unfortunately, this is pretty much what former film critic Rod Lurie does in Resurrecting the Champ. The movie is based on a real-life story that happened to L.A. journalist J.R. Moehringer 10 years ago, though Lurie changes the names and moves the setting to Denver. Josh Hartnett stars as Erik Kernan, a lowly sportswriter at a metropolitan daily paper who rescues a homeless man (Samuel L. Jackson) one evening from being beaten by some thrill-seeking teens in an alleyway. The man identifies himself as “Battling” Bob Satterfield, a former heavyweight boxer who once sparred with Rocky Marciano and was ranked third in the world. Kernan, who’s stuck covering the high schools and other low-profile events, sees writing Satterfield’s sad story as his ticket to the glamorous NFL or NBA beats.

The movie opens with Hartnett’s voice-over narration, “A writer is like a boxer,” a strained and self-aggrandizing comparison that marks a bad start for a filmmaker who is primarily a wordsmith. Indeed, Lurie shows little visual flair as a director, failing to capture the thrill of the boxing sequences or the atmosphere of a title fight in Vegas. Instead, he loads up his DELETE with cloying exchanges between Kernan and his worshipful young son (Dakota Goyo), and dry debates about journalistic ethics between Kernan and his fellow reporter/estranged wife (Kathryn Morris, struggling with the unrewarding role of the movie’s moral center). The other actors are dull, and Teri Hatcher is unwatchably miscast as a hard, cynical TV executive.

Even that pales in significance beside the story’s central dilemma. Halfway through the film, Kernan’s story is published, and readers begin to raise serious doubts about whether Satterfield is who he claims to be. Instead of focusing on the detective work or the implications of a journalist being snookered this way, Lurie uses the whole affair to explore Kernan’s boring issues with his deceased dad and thus robs the movie of its intended gravity. Other recent movies about journalistic botches (Shattered Glass, The Hoax) have turned similar real-life stories into better drama, and they beat Resurrecting the Champ to the punch.

The sharpest disappointment this week is The Nanny Diaries, adapted from the best-selling novel based on the experiences of real-life New York nannies Emma McLaughlin and Nicola Kraus. The book is prime disgruntled-assistant lit, aimed at negligent wealthy parents who hire strangers to raise their kids and then repay them with low salaries and even lower amounts of human respect. The book is adapted by Robert Pulcini and Shari Springer Berman, the husband-and-wife team who made American Splendor, and they make significant improvements on the source, but at a price. The novel’s anonymous narrator is here given a name that sounds like “nanny.” Annie Braddock (Scarlett Johansson) falls into the child-care business after flaking out of a high-paying financial job that her hardworking single mom (Donna Murphy) had been pushing her toward. Instead, Annie goes to work for a Park Avenue wife tactfully referred to as Mrs. X (Laura Linney), who treats her rageful 8-year-old son Grayer (Nicholas Reese Art) as a terrible inconvenience to her social life.

Subjected to repeated indignities by her new employer, Annie supposedly stays on because she becomes emotionally attached to Grayer, but the kid actor is charmless. There are lesser problems, too — the family name of X is a device that just barely works on the page, and having the actors actually give the letter as their name is too jarring. So is the framing device of having Annie deliver the voice-over narration in the form of an anthropological case study. Mean Girls did the same thing to better effect, and this movie’s other whimsical satirical touches land wrong, such as a floating umbrella that transports Annie à la Mary Poppins. (Though it would’ve been fun had Johansson burst out singing “A Spoonful of Sugar.”)

That’s too bad, because Pulcini and Springer Berman do some quality work with the characters and the actors portraying them. Where the Xs in the book are cardboard evil bosses, here they pop into three dimensions. Linney does petty and imperious like nobody’s business, but against heavy odds she manages to make Mrs. X human in the scenes detailing the Xs’ poisonous marriage. Paul Giamatti helps out by playing Mr. X vividly as a first-class bastard who batters his wife without ever touching her. Elsewhere, Alicia Keys finds a non-stereotypical way to play the ethnic best friend role. Best of all, the filmmakers fix the book’s aggravatingly passive-aggressive main character and allow her to let her grievances fly at film’s end. Johansson spends so much of the film looking timid and bullied, it’s rewarding to see her (sort of) face to face with Mrs. X, telling her what a bad mother she is. With this cast, this movie could have been great. Too bad the filmmakers have such a hard time finding the right tone.

Rowan Atkinson is one of those British acts who has never caught on Stateside and not for lack of trying, either. The spaghetti-limbed, bug-eyed comic has been a megastar in his native country for the last two decades, slaying audiences with his stand-up act as well as with his sharp performances as a soulless West End comedian in The Tall Guy, a tongue-tied vicar in Four Weddings and a Funeral, a bumbling James Bond wannabe in Johnny English, and a scheming social climber in the priceless British TV series Blackadder. I must say I much prefer Atkinson in those roles to when he plays Mr. Bean. He created this nearly silent character for British TV back in 1990, and Bean’s childlike nature gives the comic license to indulge in pure slapstick and mug relentlessly. The character is wildly popular in Europe, but his unsubtle nature makes him very much an acquired taste for American audiences, who failed to turn out for the 1997 film Bean even though it was set in this country.

Mr. Bean’s Holiday moves the character to the south of France, where he’s won a vacation from a church raffle, and where Jacques Tati’s equally taciturn Mr. Hulot created movie chaos 50 years ago. Disaster is never far away when Bean’s around, and while traveling from Paris to Cannes, he causes a Russian guy (Karel Roden) to miss the train, leaving the stranger’s 10-year-old son (Max Baldry) stranded without his dad. Bean resolves to look after the kid — who speaks some French, unlike Bean — and reunite him with his father. The farce here tends to be on the predictable side; when Bean sets down his passport to make a phone call, you know he’s going to lose it. There’s certainly nothing as outrageous as the sequence in the first film in which Bean destroyed the Mona Lisa. Two sequences catch fire: The first is when a Euro-less Bean finds a way to panhandle creatively in a marketplace; the other is the climactic scene in which Bean hits the Cannes Film Festival and sabotages the premiere of a pretentious movie by a narcissistic American filmmaker (Willem Dafoe).

The rest of it moves along at a reasonable pace thanks to director Steve Bendelack, and Atkinson’s deft physical shtick proves that he is, at 52, aging better than Jackie Chan. Mr. Bean’s Holiday isn’t being marketed as a kids’ movie, but it’s rated PG, and smaller kids will likely enjoy the film more than anybody else. As for the parents, it all depends on their tolerance for a star who matches Jim Carrey or Roberto Benigni at their broadest.