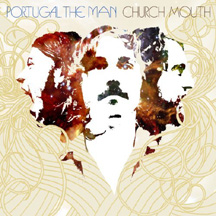 Borne on a trellis of chameleonic meters and obfuscating lyrical vistas formed by swirling religious allusions and misty images of nature, the smoky, fuzzed-out blues of Church Mouth seems to be an idealist’s response to a world that has duped him one too many times. It’s as if frontman John Gourley decided the best way to combat The Big Scam was to hide beneath a fog of shifting grooves and shifty musical allegiances. Gourley dusts the record with traces of Motown, but his most obvious source material is Led Zeppelin III. The song doesn’t remain the same, but both records share the same sonic skeleton. His high-tenor-to-falsetto wail is indeed an obvious descendant of Robert Plant’s, but it’s also a dead ringer for Jack White’s. This similarity, coupled with the electrified pentatonic-scale riffage, might make for an unfortunate dismissal as a White Stripes knock-off, but PTM has so much more going on that the band is obviously a different beast.

While rooted in the blues, the licks chug and charge over beats that would be just as comfortable on a trip-hop album or drum-’n-bass remix. Without grinding gears, drummer Jason Sechrist switches from down-tempo rumpshakers to thudding, primal stomp, anchoring bassist Zack Carouthers in grooves that alternate between mania and hypnosis. In other words, it’s a lot bigger and knottier than anything by the aforementioned Detroit duo. If it sounds as if Church Mouth is all over the place, you’re probably right, but it’s not in a way that is distracting or premeditated. In fact, the organic genre-blending and stream-of-conscious lyrics lend the record an air of blighted naiveté. It’s not angry and jaded, nor does it lament lost innocence. Rather, Gourley trades in bitter irony for inscrutability, and the effect is much more interesting than every other preciously self-impressed indie band. The songs narrowly avoid the grip of classification, taunting the listener to lunge at them and jumping out of grasp at the last second, kind of like trying to domesticate a wary stray dog. Gourley and company appreciate your good will, but you’ll never fully tame or contain them. And, ultimately, that’s what makes them interesting and great.-Steve Steward