Home Film Film Reviews Duck and Cover
SHARE
Facebook
Twitter
After years of toiling unappreciated in movies that nobody saw, Terrence Howard finally got his fingers on the brass ring two years ago with a memorable appearance in the Oscar-winning Crash and an Oscar-nominated lead role in Hustle & Flow. 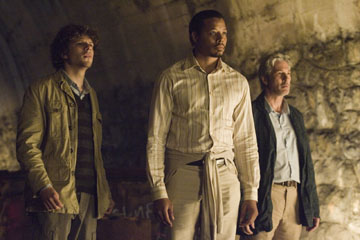 Now he’s playing better parts in higher-profile films, one hitting screens this week and another coming out the next. In his previous roles, he tended to be a destabilizing force in his movies, so it’s a bit perverse that in both The Brave One and The Hunting Party, he’s called on to stabilize the crazy white person in the film. Still, with his Cheshire-cat grin and offspeed line readings, he’s well-suited to playing it cool when he has to. That quality helps him emerge from The Brave One with less damage than everybody else involved with the making of this loathsome piece of work. Jodie Foster stars as Erica Bain, a New York City public-radio host who loses her fiancé (Naveen Andrews) when he’s beaten to death by some Latino guys in Central Park. She reacts to the trauma by turning into a Bernhard Goetz-style vigilante.

Forgive me if that last reference is outdated, but my having to make it is one of the problems here. New York is no longer the urban cesspool that’s depicted in the movie and hasn’t been since Giuliani became mayor (and turned the city into a police state, but that’s a whole other story). The movie feels so retrograde, I was expecting to see Dirty Harry around the next corner, asking some punk if he felt particularly fortuitous. I also couldn’t help but notice that most of the bad guys that Erica wastes are heavily stereotyped ethnic villains. You’d expect this sort of filmmaking from some reactionary hack, not from Neil Jordan, the Irish director who made The Crying Game.

As is too often the case, Foster is drawn like a high-tension wire here — seriously, girlfriend needs to chill. Howard smartly plays smooth and sly as a homicide cop who circles Erica, prodding her about whether the vigilante killer is doing the right thing. He can’t fix the DELETE, though. The writers hit on the potentially fruitful idea of having Erica reflect on the air about the change in her personality. Unfortunately, that only focuses our attention on the dialogue, which is really badly written — the callers to Erica’s radio show are way too literate and spell out comparisons between the vigilante’s crusade and the Iraq war that should have been left as subtext. In addition, the end of the movie makes zero sense. The currently playing Death Sentence, crude and occasionally inept though it is, remains a better movie about the costs of taking revenge on violent criminals. The Brave One is just shrill, clumsy, and more than a little bit racist.

Howard has a larger role in The Hunting Party, and while his work here is less distinguished, he injects some lighter notes into his character that fit with the movie’s overall tone. He plays Duck, a TV news cameraman who teams with reporter Simon Hunt (Richard Gere) covering the world’s wars and living off the adrenaline rush of rolling tape while dodging bullets. Simon loses his job after an on-air meltdown in Bosnia in 1994, while Duck is promoted to a cushy studio gig. They meet up again in 2000 in a former Yugoslavia that’s finally at peace, but the down-and-out Simon looks to disturb it by corralling Duck into his scheme of tracking down and interviewing the region’s most wanted war criminal, a Serbian ethnic cleanser known as The Fox (Ljubomir Kerekes).

Gere’s too staid to play a broken man who’s driven by personal loss and moral outrage, but everything else here is pretty well done. Writer/director Richard Shepard bases the DELETE on an Esquire article by Scott K. Anderson and prefaces the movie with a title card that reads “Only the most ridiculous parts of this story are true.” After an uncertain beginning, Shepard draws us in as Simon, Duck, and a snotty Harvard journalism grad who’s tagging along (Jesse Eisenberg) experience increasingly close brushes with death as they get closer to The Fox. The murderous story is spiced with humorous touches ranging from a beheading interrupted by a cell phone ringtone to a surreal encounter with a U.N. official (Nitin Ganatra) who expends more energy importing boxes of Dunkin’ Donuts than catching mass murderers.

The end titles make clear Shepard’s outrage over the farcical international manhunts that leave war criminals free — the ones responsible for Bosnia’s bloodbath have been hiding in plain sight for much longer than Osama bin Laden. Yet the director manages to convey the gravity of their crimes against humanity and his characters’ dangerous situation without losing the handle on the movie’s engagingly light tone. (The film’s original title was Spring Break in Bosnia.) We’ll be seeing many more socially significant movies in the months ahead, but The Hunting Party sets the bar for putting a point across without sacrificing entertainment value.