Home News Metro Found: Too Many Signs
SHARE
Facebook
Twitter
The bright and colorful signs hammered into the grass in the public right-of-way or stapled onto utility poles promote everything from diet formulas to dating services. 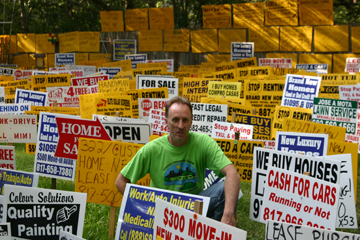 Referred to as “bandit signs” by code enforcers, they’re a cheap but illegal way to advertise. Weak city ordinances rarely allow for prosecution, so small-time entrepreneurs erect them by the thousands. “Our neighborhood is like a drive-through classified ad section,” said Mike Phipps, one of many Fort Worth residents pushing for stronger sign laws and more aggressive enforcement. “It’s another form of trash on our streets.” In just three weeks, Phipps gathered hundreds of bandit signs from his West Meadowbrook neighborhood and covered his yard with them. It looked like a cemetery crammed with neon headstones.

It doesn’t require a visit to one of the palm readers advertised on a sign to see that the future is bleak for these bandits. City officials are reviewing the sign ordinance, hiring inspectors, and establishing a court designed to deal with signs and other code infractions, said Brandon Bennett, assistant director of the city’s code-compliance field operation. “For a long period of time the city hasn’t had a sign inspector,” he said. “Now that the Development Department has hired three sign inspectors, we’re going to have more focus on these illegal signs out there. But more inspectors without the necessary tools means the same results.”

The tools he refers to are tougher laws. Putting a sign in the right-of- way is a misdemeanor. But even that mild penalty attaches only when someone is caught in the act — a pretty rare occurrence. “Most often what happens is the signs get put out in the middle of the night, and we receive complaints about them the following day,” Bennett said. City employees call the businesses listed on the signs and tell them they are breaking the law, but that has little impact. So the city yanks up more than 2,000 signs a month and sends them to landfills. Frustrated residents grab their share as well. Years ago, corrugated plastic signs on sticks cost up to $10 a pop. Nowadays, they cost about a buck, and those removed are replaced almost overnight. For the past 10 years, the city has fought a losing battle. “It’s affordable for them to buy the signs en masse,” Bennett said.

Business owners are full of excuses. They tell city officials they weren’t aware of the sign law or that illegal placement is their employees’ fault or that someone must have moved them. One code inspector recalled seeing a woman putting up a garage-sale sign and telling her she was breaking the law. The woman shrugged and put up the sign anyway. The code inspector picked up her sign and put it in his car. The woman wanted her sign back, and complained when she didn’t get it. She got no citation because, the inspector said, the city was trying to balance enforcement with being a good neighbor.
Garage-sale and lost-pet signs are problematic because many people don’t retrieve the signs when they’re no longer needed. But the real problem is avid entrepreneurs selling or buying houses and promoting any number of products and schemes.

Fortunately, the city has an ace up its sleeve — actually, a pair of aces. First, city officials are considering instituting a civil penalty that allows them to levy fines on the businesses without an inspector having to catch someone placing the sign. Second, a new court — due to open for business within the next few months — will focus on code violations, using existing judges, prosecutors, and courtroom space. With the laws tightened, sign inspectors will be on the prowl, and a city marshal is ready, with warrants, to start sweeping the city for code violators. City staff will ask the Fort Worth City Council in the next few months to authorize penalties, on conviction, of $300 to $1,000 for each offense. “Now that we have a court to focus on these things, you will see a lot more tickets issued and more enforcement activity taking place,” Bennett said.

That’s welcome news to people like Paul, a Southwest Fort Worth resident who asked that his last name be withheld because of some unpleasant run-ins. While he was taking down advertisements in his neighborhood, an angry sign owner confronted him and chased him (unsuccessfully) by car. “That guy … was wanting to fight,” he said. Paul became a sign vigilante because the sheer numbers were destroying the beauty of his neighborhood, he said. He estimates that he has pulled up about 3,000 signs since January, but that’s only a drop in the ocean. “In the past seven or eight years it’s been rampant,” he said. “Go to these wooden telephone poles and just look at the nails on them. There are hundreds, maybe thousands of nails in most of these poles.”

Some entrepreneurs have started using ladders, placing their signs 10 or 15 feet high. But Paul countered by welding a hammer to a paint roller extension “so I can extend it up there and rip them down.” He’s called the businesses to complain about signs but is usually told to mind his own business or get a life or “go have sex with myself,” Paul said. He doesn’t consider himself obsessed. “I want the city to look good. The only reason I’m involved in it at all is because I don’t see anything being done.” Because so little’s been done about complaints before, he’s skeptical about the new enforcement efforts. “Let’s see if it happens,” he said. He has little sympathy for those responsible for bandit signs, even those seeking lost pets, because they so often fail to remove their signs afterward. “I’ve picked up a sign that said, ‘Lost parrot,’” Paul said. “If a parrot is gone, he’s gone.”