Classic novels of homoerotic obsession — titles like Evelyn Waugh’s Brideshead Revisited, Thomas Mann’s Death in Venice, and, if you want to give it a queer-theory spin, John Knowles’ A Separate Peace — have traditionally acquired their dramatic tension through the presence of the 800-pound lavender gorilla that the authors are furiously writing over, under, and around: Bluntly stated, one of the leading male characters wants to snog another one so badly that he’d sell his grandma for the opportunity. Subtext becomes theme, and you know one of the protagonists has to die of alcoholism, cholera, or a fall from a tree to neatly conclude all of that erotic pining. In the classic literary equation, lust must be, if not life-giving, death-dealing. 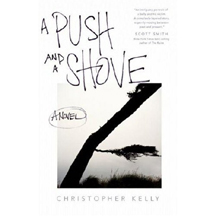 But we’ve come a long way, gayby. (Or at least a few feet further: Annie Proulx let Ennis and Jack consummate their love, but Jack still had to get whacked in a field for his trouble.) The ongoing specter of AIDS has by now felled more straight than gay victims worldwide, and homosexuality no longer automatically equals tragedy in fiction. Your neighborhood Borders has a well-stocked gay-literature shelf full of comedies and dramas about negotiating love, sex, and our current national political climate inside the gay scene. So it’s interesting — and refreshing — that the debut novel by Christopher Kelly, A Push and a Shove, has a semi-retro feel to it. With glancing similarities to both Brideshead Revisited and A Separate Peace, Kelly has written a confident if structurally chaotic work of psychological suspense that boils over with shame, unrequited longing, fear of disease and death, and family guilt. The Human Rights Campaign can work its ass off to install Hillary in the White House, but it can’t scrub these very human impulses from our lives.

Kelly is, of course, the chief film critic for the Fort Worth Star-Telegram, and you can surmise that all those hours in a dark screening room contributed as much to the best scenes in this book — they are acutely observed, almost cinematically visceral — as did a lifetime of reading. His powers of deDELETEion effortlessly create indie-flick-style images and energy for the tale of Ben Reilly, a disappointed, semi-closeted Staten Island public school teacher. Spurred on by a violent attack in the school hallway that fires up dormant memories, he tracks down his own long-ago high school tormentor, Terrence O’Connell, and then insinuates himself into Terrence’s glamorous Manhattan lifestyle of writing celebrity profiles for GQ. Terrence is contrite about his past asshole qualities and intrigued by Ben’s gambit, and the two begin a pas de deux of flirtation and hostility that climaxes perilously on a Colorado mountain-bike trail.

A Push and a Shove introduces perversity not in Ben’s (and maybe Terrence’s) sexual orientation, but in the fact that Ben has for almost a decade carried a torch for the guy who mercilessly taunted him as “a gaywad” and “a faggot” and who — as the last gesture of his teenage campaign of torment — pushed him head-first onto a hardwood floor. That this romantic obsession does not come off as far-fetched is a tribute to the author’s sophisticated psychological portraiture: With the adult Ben still afraid to come out to his family, terrified of contracting the HIV virus, and generally allowing his life to fall into an arid personal and professional pit, maybe he really is the lowly “faggot” that Terrence recognized so early. Could the teenage bully who publicly named Ben’s secret sorrow in school be the adult who can redeem him from it?

This is a scorching excavation straight to the heart of self-loathing that gay men were supposed to have shed years ago; its cathartic honesty is the best claim to a greatness that A Push and a Shove almost achieves. But problems begin to emerge toward the middle of the book. Fourteen chapters span the narrative’s 22-year arc, but not chronologically. Chapters alternate haphazardly from 1982 to 2000 to 1986 to 1990 in whiplash fashion. It’s not a confusing read, but all that jumping back and forth in time seems like a showy contrivance. And not all of the story threads are dramatically worthy. An entire section devoted to the chronic disappearances of Ben’s brother Danny back in the ’80s lacks the impact of the larger story. Finally, the incessant internal pondering that Ben conducts about Terrence once they hook back up (which can be summed up as “Is he or isn’t he?”) starts to wear on the reader, like the close friend who won’t shut up about the guy who dumped him.

Still, Kelly triumphantly locates the intersection of shame and affection in one apparently unlikely teenage crush. What starts out as implausible comes to seem discomfitingly familiar. The best adjective for that feat is “revelatory.” A Push and a Shove is uncanny in its ability to illustrate how love and hate are inseparable and might, in the end, be the same thing.-Jimmy Fowler