Home Film Film Reviews Not a Novelty
SHARE
Facebook
Twitter
When I reviewed Becoming Jane two months ago (“Conduct Unbecoming,” Aug. 8), I mentioned how certain movies and books imagine a romantic life for Jane Austen, when history indicates that none existed. 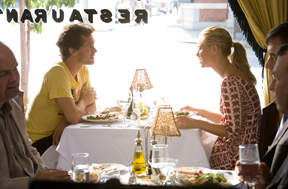 The Jane Austen Book Club falls into a different, more up-to-date trap. More so than the Karen Joy Fowler novel that it’s based on, the movie assumes that Austen’s novels are a preDELETEion for romantic happiness. They’re not; they’re just stories. They’re some of the best stories ever written, they resonate today because their depictions of happy and unhappy relationships are so dead-on, and they might well help readers recognize and avoid unhappiness. Still, happiness is something that comes to you — or not — pretty much regardless of which books you read. Reading does many great things for you, but it won’t bring love into your life or turn your bad relationship good. Unfortunately, this pleasantly scattered dramedy winds up endorsing just the opposite idea, and that’s what caused my inner Jane Austen to perk up and look skeptically on this movie. (Yes, that would be the same inner Jane Austen that sat placidly through Resident Evil: Extinction. She comes through when she’s needed.)

The story is set in the Sacramento area in the recent past. When stay-at-home mom Sylvia (Amy Brenneman) gets ditched by her husband (Jimmy Smits) after more than 20 years of marriage, her best friend Jocelyn (Maria Bello) — a dog breeder who’s mourning her own loss, that of her beloved Rhodesian ridgeback — decides that they both need a project to occupy their minds. Thus, she gathers together six friends and acquaintances who agree to hold monthly meetings at their houses, discussing each of Austen’s six novels in turn.

Though this is a book club, it might as well be a movie club for all the projecting that goes on. The characters’ analyses of Austen’s characters get predictably tangled up with their personal agendas, and when Sylvia vociferously defends Mansfield Park’s Fanny Price as a woman who fights for her man and tries to make their relationship work, it’s easy to see what she’s really driving at. This part of the movie would function better if the female characters didn’t melt into one another. True, their similarity in Fowler’s book is part of the author’s commentary that book clubs tend to be enclaves of middle-aged, middle-class white women. The actresses playing these roles all have their moments, especially The Devil Wears Prada’s Emily Blunt as a severe high-school French teacher who’s all too aptly named Prudie — she pulls off the American accent by adopting a high-pitched, nasal voice that fits the character’s uptightness. However, they can’t keep the movie from feeling a bit insular itself even as it attempts to criticize the club’s insularity.

The job of providing an outsider’s perspective falls to Grigg (Hugh Dancy), the group’s only male reader, a computer tech and science-fiction fan who has never read Pride and Prejudice, much less any of Austen’s other stuff. Grigg’s awareness that he’s playing catch-up doesn’t stop him from comparing one of the novels to The Empire Strikes Back or making a play for the considerably older Jocelyn. Like many other English actors, Dancy tends to look ill at ease when playing Americans, but here he turns it to his advantage, and makes this character seem edgier than he is on the page. His performance is funny and winning, but the problems with the conception of this character are beyond his powers to cope. Grigg is nonconfrontational and eager to read an accepted classic of literature. There are indeed nerdy guys who fit that deDELETEion, but guys like this are likely to be more unpredictable and less pliable. It’s hard not to think that Grigg could have served as a better wild card for this little club. Had Seth Rogen’s character from Knocked Up somehow found his way in here, that would have made the movie so much more interesting.

All in all, The Jane Austen Book Club passes by breezily, yet it eventually succumbs to that boilerplate Hollywood thinking wherein every romantic subplot has to end happily, and the bit where Prudie saves her marriage by begging her alienated sports-geek husband (Marc Blucas) to read Persuasion with her rings dismayingly false. Austen fans seeking a contemporary cinematic equivalent should consult Whit Stillman’s films; like Austen’s books, The Last Days of Disco and Metropolitan are coruscatingly funny and evoke a rarefied social world, and aren’t afraid (as this movie seems to be) to give their characters some hard knocks in their search for love. They provide much more fodder for discussion than this movie does.