The Sadies built their reputation on a mélange of styles referred to by various critics as (choose one or more terms) honkytonk rockabilly twang spaghetti-western surf electric bluegrass psychedelic pop garage-rock. There’s a little bit of everything on New Seasons, The Sadies’ first studio album in three years. 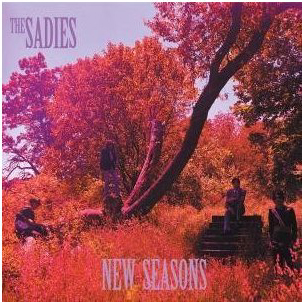 The intent here appears to be to highlight the lyrics and the stories they tell, although discerning the words is sometimes difficult because of an uneven studio mix. Some of the songs sound as clear as twin bells pealing, while others are so muddy that the vocals can be hard to distinguish from the music. Song textures vary from thin and jangly to luxurious, chiefly courtesy of brothers Dallas and Travis Good’s harmony singing. The playing is always solid. Various songs on New Seasons were recorded at studios in Spain and Toronto, but that doesn’t explain the uneven production — elements of muddiness and clarity can be found in songs from both cities. Rather, chalk it up to the artistic preferences of the group and its co-producer, Jayhawks frontman Gary Louris.

Right in the thick of the 13 songs, the brothers and their bandmates deliver three unquestionably fine songs that combine strong lyrics, strong music, and a sturdy mix. The layered timbre of “Anna Leigh” creates a gentle tension that fits a lover’s plea to heed the warning of a dream. “The Trial” is a similarly layered hope to be “the way I once was.” “My Heart of Wood” asks why we would stay the same as the years pass by and why we don’t walk away from what we know, to find what we’ve missed. The Sadies’ blends are cool, but the results are too inconsistent to let New Seasons soar.-Tom Geddie