Home Film Film Reviews Unoriginal Gangster
SHARE
Facebook
Twitter
The shortcomings of American Gangster are right there in the title. It’s the latest film by Ridley Scott, a director who long ago was pegged as a mythmaker. 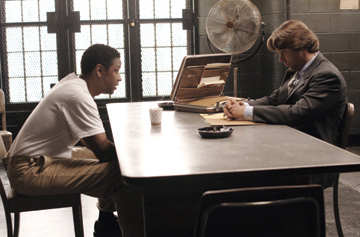 Here, Scott takes the story of a real-life drug kingpin (in the 1960s, before that term existed) and inflates it to Citizen Kane-like proportions. Clearly Scott intends this to be a monument to a man’s misguided dreams of power and a crime movie to end all others, or at least one that’ll pick up a few Oscars next February. His efforts aren’t for naught, but Scott’s mythologizing approach doesn’t fit the material, which is why the film leaves you unsatisfied. The movie is based on a magazine profile that Mark Jacobson wrote for New York magazine in 2000 titled “The Return of Superfly.” The subject was Frank Lucas, a small-time hood from the Carolina backwoods with enough brains and ambition to have succeeded at anything, even despite his lack of schooling and the racism of his time. He learned the ways of big-time racketeering under legendary gangster Ellsworth “Bumpy” Johnson and after Johnson’s death started importing pure heroin from Southeast Asia, smuggling it into America in the coffins of soldiers killed in the Vietnam War, and selling it on New York City’s streets.

While Lucas’ drugs laid waste to the poor neighborhoods of the Bronx, the man schmoozed with celebrities and built an eight-figure fortune in cash, drugs, real estate, and other properties before federal agents busted him in 1975. This remarkable tale is even more remarkable in print, though for some reason Scott and screenwriter Steven Zaillian omit the most outrageous story details, like Lucas’ love of fast cars, his chummy relationship with cops and judges even after his imprisonment, and his stint as the lead actor in a low-budget blaxploitation flick that’s now lost to history. (Don’t worry, though. They do keep the part about Lucas having his dope cut by roomfuls of women who are naked, to prevent them from stealing product.) The filmmakers are bent on turning Lucas into a tragic figure, and as a result Denzel Washington plays him with sobriety and gravitas when the part really could have used more of the flamboyance that the actor brought to his villainous turn in Training Day.

Lucas’ presence is counterbalanced by that of Detective Richie Roberts (Russell Crowe), an NYPD officer who — unusually at that time — wasn’t on the take and helped bring Lucas down. Roberts is supposed to be the morally slippery lawman opposite the charismatic criminal, but his personal failings are encapsulated too neatly by the character of his ex-wife (Carla Gugino) when she points out that he maintains his spotless integrity on the job so he can cheat at everything else in his life. The movie could have worked excellently as a lean cops-and-robbers exercise, but Scott isn’t made for genre pieces — witness his cloying recent vanity project A Good Year. Instead he stuffs the movie with supporting characters and saddles them with poorly developed subplots: a cop who’s shaking Lucas down (Josh Brolin), a clownish rival dope dealer (Cuba Gooding Jr.), a Lucas cousin who gives up a baseball career for the drug trade (Clifford “Tip” Harris a.k.a. T.I.). Chiwetel Ejiofor is sadly wasted as one of Lucas’ younger brothers, and Roger Bart can’t do any more than spew ethnic slurs in his one scene as a racist U.S. attorney. Lucas’ mama (Ruby Dee, 83 years old and still getting it done), is the only one who adds anything, as she confronts her eldest son late in the film with the realization that he has led all his brothers astray and that she let him do it.

This 157-minute film either needed to be an hour shorter or half an hour longer. Scott at least directs skillfully enough that the movie doesn’t lag. There aren’t any outright bad scenes, and a couple of set pieces are memorable without rising to the status of classic, namely the big shootout near the end between the agents and Lucas’ thugs and Frank’s public assassination of his nearest rival (Idris Elba). American Gangster took an unusual amount of trouble to bring to the screen, and, all in all, it turns out OK. The thing is, audiences have a right to expect better than OK here. They have a right to expect an event, with this movie’s running time and talent. For all their aims of making a grand statement, the filmmakers can only render Lucas as the ultimate believer in the American system, a point that The Godfather made 35 years ago and to greater effect. The climactic sit-down between Crowe and Washington (the only time in the movie when they share the screen) should conjure up echoes of the Pacino-De Niro scene from Heat. Instead, it’s competent and little more. This film may look better in a year when you’re catching it on cable TV, but with the multiplexes currently crowded by better movies pitched at grown-ups, American Gangster simply doesn’t measure up.