North Texas’ vampires are in danger. Clubs, hotels, hot spots, and other holy places are being attacked by a dangerous enemy. 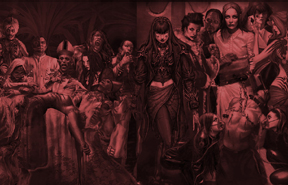 The blood-suckers are even turning to werewolves for help. The underworld hangs in the balance! Well, at least according to DFW Productions, an informal group of live-action role-players (LARPers), serious gamers who take the action from the computer screen or the gameboards to the streets. Off and on for the past three years, the local LARPers have been playing Vampire, where scenarios like the one described above are central to the plot. Like most LARP games, it has a set of rules that players must learn and follow. In each game, the game-master, or storyteller, creates a scenario, and the players must propel the narrative. They use maps and other props, and, yes, some players “die.”

DFW has a core membership of about 25 folks. As vampires, shapeshifters, and other creatures of the night, they meet on the second and fourth Saturdays of each month and play from late afternoon until well into the night. (Dressing up as Tarzan or a naughty nurse for your significant other does not count as LARP, nor does reciting lines in front of a camera or paying audience.) A mix of socializing, thespian flare, and a bit of childhood innocence goes into every game. Naturally, LARPers might top the list of the world’s geekiest geeks (a term I use lovingly, being one myself). To outsiders, LARPers are socially awkward people who like to play dress-up — fake elf ears, tinfoil swords, and all. (And you thought Trekkies had it rough.) But the reality is that, as with any social group, the extreme geeks attract the attention, even though they’re often the smallest in number. “You’ve got people of all ages and interests [in DFW],” said Robert Hodges, the group’s current coordinator. “I certainly wouldn’t stereotype, because I don’t think there’s any one factor [in DFW’s makeup] other than that they enjoy the interaction and camaraderie that LARP provides.”

Technically, he said, LARP represents the highest evolution of gaming. Instead of sitting in front of a computer or TV screen or at a table in the den, LARPers are running around and becoming the games. LARP, he said, “is designed to be more about the players trying to emulate their characters,” much in the same way that, say, an actor might get into the role of Hamlet or Dr. Frank-N-Furter. During one DFW LARP game not too long ago, Hodges recalled, about 30 passersby stopped to watch the interaction between two LARPers. Actors get the same thrill every time the curtain rises, but, for gamers, Hodges believes, that visceral rush can come only via LARP. Not every DFW LARPer gets seriously into character. Some players dress in their everyday clothes. Also, LARP, like most theatrical endeavors, might actually help geeks learn some social skills. “LARP, like any other personal hobby, is something that you have to respect for the amount of time you spend on it,” Hodges said. “If you spend too much time on it, it’s not healthy. If you spend eight hours a day playing online games, that’s not healthy. If you spend all weekend sitting in front of a TV watching sports, that’s not healthy.”
To keep things fresh, DFW is switching from Vampire to a new game, Changeling: The Lost, and will meet this weekend for the first time in over a month to iron out details. Visit www.dfwlarp.com. -Cole Williams