Note to all young musicians who aspire to be contemporary prog-metal giants: It took Tool 10 years to become Tool. 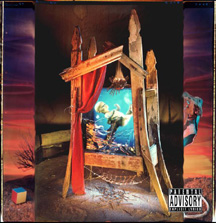 And while you must applaud the effort, Symmetry, by the group Di Meliora Ferant of North Richland Hills, is an album in need of about 10 years of fine-tuning. Trying to make an epic requires more than a four-track and a drummer who doesn’t leave his ride-cymbal alone for a second and whose snare sound is stolen from Metallica’s lo-fi experiment, St. Anger. You need songs — one hour long, five minutes long, whatever. Just give the listener some melodies or dynamic sonic textures to latch on to.

Perhaps the individual musicians themselves here are partly to blame. Vocalist Jacobi Vladimar sings in a hushed tone that makes you yearn for a pay-off — you know, some sort of huge chorus — but he never delivers. The guitarists wander here and there, doing a lot of acrobatics but never saying anything. In the best prog-rock, especially the ancient stuff (King Crimson, Yes, Emerson, Lake, and Palmer), beneath the experimental movements is always some sort of tonic or connective riff or melody that unites everything. Di Meliora Ferant can do the atmospherics well enough. But unless you’re really into New Music or noise-rock, atmospherics alone won’t cut it.-Justin Press