Amy Adams has kicked around Hollywood for a decade, bagged an Oscar nomination, and acted in probably more than one movie you’ve seen. 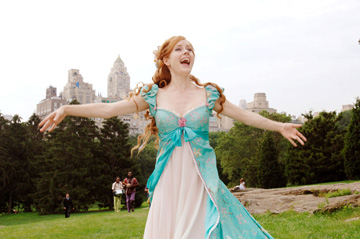 For all that, you still may not know who she is. The 33-year-old strawberry blonde grew up in Colorado but is often cast as a Southerner, like the judge’s daughter who falls for Leonardo DiCaprio in Catch Me If You Can or the assistant who delivers a frenzied pep talk to Will Ferrell in Talladega Nights. (“Ricky Bobby is not a thinker! Ricky Bobby is a driver!”) Maybe it’s the Southern emphasis on ladies’ manners that jibes with Adams’ high-octane performing style, which is so heavily mannered that she sometimes doesn’t seem quite real. That may sound like a knock on her acting, but like Parker Posey, Felicity Huffman, and a few others, she studiously avoids realism in favor of stylized expressionism, using carefully calculated gestures to capture emotional truth or to turn a joke or sight gag in an unexpected direction. Nowhere was she more successful than in her heartbreaking and helplessly lovable Oscar-nominated role in 2005’s Junebug as an expectant young wife who seemed constantly dazed by the wonders of everyday existence.

All the above qualities perfectly suit her for the delightful Disney-sending-up-Disney comedy Enchanted, in which she gives a comic tour de force. She plays Giselle, who starts out as a peasant girl in a fairy-tale kingdom, in a movie that starts out as an animated Disney musical. When she meets the handsome Prince Edward (James Marsden), the two instantly fall in love and decide to get married. However, the prince’s wicked mother (Susan Sarandon) pushes Giselle into a magical portal that strands her — in human rather than cartoon form — in present-day New York City.

To be painfully obvious, this isn’t a part that can be played realistically. Adams, a trained dancer among other things, treats it as a dancing role and often wins laughs by simply wafting through her scenes. (That can’t be easy, since she spends much of the early going navigating the streets of midtown Manhattan while wearing at least 20 square feet of organza.) More importantly, she manages to convey Giselle’s essential sweetness, which is no less genuine for being outsize in that Disney way. Late in the film she finds herself angry for the first time in her life, and her immediate response is to burst into peals of astonished laughter and say, “This is wonderful!” No matter how bad Giselle’s situation becomes, Adams instantly flicks on the smiles and warmth when anyone extends her the slightest kindness. A single false note from her would have wrecked the whole movie, but there aren’t any. Compare her work to Dustin Hoffman’s and Natalie Portman’s performances in Mr. Magorium’s Wonder Emporium. While her more famous colleagues fall on their faces straining to evoke fantasy and magic, Adams inhabits her role with a serenity that convinces you that she’s not of this world. This is a physically and emotionally taxing part — things we don’t usually associate with light comedies — and Adams fills it out with whirling colors. (Let’s spare some praise too for Marsden, who exhibits the same madcap conviction in his terribly funny version of a hammy, self-satisfied Disney prince.)

As for the story, it’s rather spotty. Much of it revolves around Giselle’s romance with a jaded divorce lawyer and single dad (Patrick Dempsey) who agrees to let her stay in his apartment. Their meeting is a contrived bit of business, and their chemistry is the slightest bit off — though Dempsey gives it his best, he’s short an ounce or two of the introspection and self-doubt that his role calls for. Giselle is followed into our world by the queen’s toady (Timothy Spall) and a talking squirrel who’s blessedly rendered mute by the transition to reality, but these characters don’t add much and just take up time. The collision of fantasy-world and real-world characters isn’t played as inventively as you’d like, and the climactic sequence with Giselle facing down the evil queen is too scattered to be effective.

Director Kevin Lima, whose previous work includes the inauspicious 102 Dalmatians, has his shaky moments but does a fair job preserving the tone of the piece. Screenwriter Bill Kelly finds enough working jokes per scene to keep the movie from dragging, and the filmmakers allow some of the cartoon characters’ Disney mojo to travel with them. This leads to the movie’s comic highlight, when Giselle gets the local rats and roaches to help her clean up the apartment while she warbles a “Happy Working Song” in a pleasantly tart and well-schooled soprano voice. Once again, though, it’s the star who makes this scene and owns this show completely. Enchanted is like many family films that go heavy on special effects to entertain the kids, but in Amy Adams it has a special effect that nothing else can match. Who knows if she’ll ever find another role that so perfectly matches her skill set, acting style, personality, and looks. For now, we can just sit back and bask in the glow of a funny and winning new star forming before our eyes.