Local city council races have generally followed the “Fort Worth Way” as politicos like to call it, with candidates and their handlers playing nice and keeping to a minimum all that underhanded stuff that they do in other cities: Don’t attack your opponent, don’t question character, and stick to the issues of crime prevention and sewer repair and economic development. Emphasize how you’re for all of them equally. 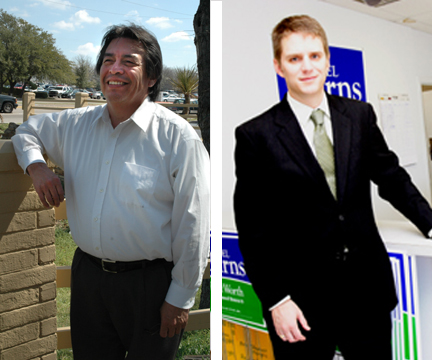 But maybe the times they are a changin’ in Cowtown. In the runoff for the District 9 Fort Worth City Council seat, opponents Joel Burns’ and Juan Rangel’s campaigns have exchanged a whole litany of attacks and accusations and even police reports. When current council member Wendy Davis announced she was stepping down earlier this year to pursue a Texas Senate seat, the opening created what Rangel calls “a very weird race.” The issues range from a flier giving false information to Hispanic voters to the use of “push-polling,” to an attempt to link one of the two Democrats to Republican guru Karl Rove. And, in what may be a first for Fort Worth, a national gay rights group has become involved.

The U.S. Department of Justice and the Tarrant County District Attorney’s office are searching for the source of the flier distributed in predominantly Hispanic neighborhoods just before the Nov. 6 election, saying that the polling date had been pushed back to Nov. 11, thus confusing minority voters. Both the Rangel and Burns camps deny they were involved. Burns has been accused of doing “push poll” phoning, in which “questions” contain negative information about the opponent. For example, a poll conducted before the general election told voters that candidate Chris Turner was a former aide to former council member Clyde Picht. Turner hadn’t worked for the sometimes-controversial Picht for 10 years. Rangel, for his part, sent out a mailer complaining that Burns uses “negative campaign practices, underhanded tactics,” and “intimidation of minorities campaigning.” The mailer features a photo of President George W. Bush and Rove, implying that Democrat Burns is just like them.

Some Rangel supporters also question Burns’ campaign funding sources. Burns, who is openly gay, has accepted $12,600 from the Washington-based Gay & Lesbian Victory Fund, a political group that supports gay candidates across the country. Some of this is just basic — though heavy-handed — campaigning, but the latest incident borders on the bizarre: Rangel is listed as both suspect and victim in two Fort Worth police reports stemming from the same incident. On Oct. 30, Rangel — who currently serves as a trustee for the Fort Worth Independent School District — went to George C. Clarke Elementary School to pass out literature to parents on the school bond issue, which was on the same ballot as the council race. It is illegal for politicians to use school grounds to campaign for any candidate or any side of an issue. Rangel said he was only handing out “facts about the bond issue,” neither advocating for nor criticizing it.

School district spokesman Clint Bond said “everything was proper” for Rangel to pass out the literature. But Randy Dukes, a Burns supporter and former Democratic activist, heard Rangel was at the school and showed up with a camera to get what he thought would be proof that the candidate was breaking campaign laws. Rangel reacted by complaining that Dukes was stalking him, but the incident reached new heights a few days later. The Informador, a Fort Worth Spanish language newspaper, had printed a story about the school filming incident, and Dukes did not like how he was portrayed or Rangel’s comments about him. So Dukes went to Rangel’s house and tacked the story and his business card on the front door, with a note asking Rangel to call him. “I just feel I have been harassed on my property from a supporter of my opponent,” Rangel said. So he filed a police report last week claiming “he is being followed by [Dukes] … and that [Dukes] is coming to his home to intimidate his family.” No charges have been filed.

A few days later Dukes filed his own report, claiming Rangel and Tarrant County Constable Sergio DeLeon, a Rangel supporter, have “harassed and intimidated” him. DeLeon and Rangel are listed as suspects on that report, and Dukes alleges that DeLeon “has had his deputies follow [Dukes] on an almost-daily basis.” No charges have been filed in this case either. DeLeon calls Dukes’ allegations “baseless and false and absolutely crazy.” The constable said that Dukes referred to himself as a “campaign aide” for Burns in the police report and said, “This is just a political ploy to muddy the waters by an operative of Joel Burns.” Burns denied that Dukes was a campaign aide, describing him as just a volunteer who helped on projects like delivering yard signs. “We did not have anything to do with [the filming incident], and it is quite distressing that some people close to Rangel think he was one of our campaign people,” Burns said. “The fact that police reports have been filed is shocking.”

Dukes, a real estate businessman who has been active in the Texas Democratic Party, referred questions to his Fort Worth attorney, Tom Hall. The attorney said that leaving a note on a door is not intimidation and that filming Rangel campaigning “was just Randy being an active citizen.” Dukes, Hall said, “is shocked by the backlash that has come his way by Rangel. It is sad … how an elected official reacts. They are conducting a smear campaign on a man with high integrity and a man who is a good citizen and father.” Some Hispanic leaders, including DeLeon, believe Davis set the table for all this angst when she resigned without giving Hispanic leaders a heads-up. “Burns was chosen as the heir apparent,” DeLeon said. District 9 is about 65 percent Hispanic, and “no one was informed on what was going to take place until it was too late for us,” he said. “The Hispanic community wanted to get a second seat on council, and the [special election] circumvented things to keep us out.” Davis did not return calls for comment.

For his part, Burns has run a campaign using much heavier artillery than a simple council race usually draws. His live-in partner, J.D. Angle, is a consultant for the Tyson Organization, a Fort Worth-based political consulting firm that specializes in phone polling. Arlington-based Civic Strategies, run by local gay activist DeeJay Johannessen, has also worked on mailings and other campaign literature for him. And The Chadderdon Group, a Virginia-based consulting firm used by national Democrats, was paid $10,000 for more mailings. In all, the Burns campaign has spent nearly $60,000 on campaign consultants, more than 10 times what Rangel has spent. Then there is the sexual preference issue. During the runup to the initial election, council member Chuck Silcox, campaigning for Chris Turner, told a conservative crowd that Burns is gay and said that was a reason to vote for Turner. After that, the national press picked up on the race. The Gay & Lesbian Victory Fund not only made a big contribution to Burns’ campaign, but encouraged many other gay activists — especially in Dallas — to do the same.

“We don’t like the kind of money he is taking in,” said Fernando Florez, chairman of the Hemphill Corridor Task Force and one of Rangel’s campaign workers. “The issue is not that he is gay — the issue is that he seems to have a lot of money coming in from outside of Fort Worth. Once you start taking big money like that, you are beholden to their interests.”
Burns responded with a simple question: “Does anyone ask Rangel how many heterosexual or Hispanic campaign contributors he has?” The runoff is scheduled for Dec. 18, and it appears Burns has a big head start on Rangel. The first election produced a high turnout in neighborhoods like Ryan Place and Fairmount, where Burns dominated; the heavily Hispanic southern part of the district had a much lower turnout. Burns got about 1,700 votes to Rangel’s 1,000. With lower overall turnout expected in the runoff, it could be tough for Rangel to make up the difference.

At this point, though, the race continues to be more about lobbing accusations than about issues that will turn out voters.
“Joel Burns is playing tricks, and he is running a campaign based upon attacks on us that are not based in any kind of facts,” Rangel said. Burns’ response was the classic one: “Isn’t that what Juan Rangel is doing?”

You can reach Dan McGraw at dan.mcgraw@fwweekly.com.