Home News Metro Eyes on TxDOT
SHARE
Facebook
Twitter
It’s looking like a tough year for toll roads in Texas, and no one could be happier about that than Terri Hall, the San Antonio woman whose group is leading the grassroots fight against the controversial pay-to-drive roads that Gov. Rick Perry and others want to see crisscrossing the state. 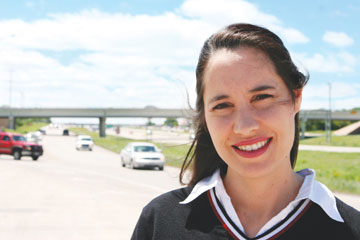 In September, Hall and her group, Texans Uniting for Reform and Freedom (TURF), filed suit in the state district court in Austin against the Texas Department of Transportation, alleging that TxDOT has broken the law by using public funds to lobby legislators for laws favoring toll roads. TURF and Hall also allege that the department’s Keep Texas Moving campaign illegally uses taxpayer money for political advocacy. The judge has refused the state’s request to toss the suit out, and TURF has now gone beyond the civil case and made a formal request that Austin prosecutors consider criminal charges against agency officials.

It didn’t help the state’s case when Hall was named San Antonioan of the year by Clear Channel radio station WOAI and “political person” of the year by the well-respected political blog, The Walker Report. “The honor is great, but it really belongs to the people of Texas who are standing up to toll roads,” Hall told Fort Worth Weekly. The most serious blow to toll roads, however, may have been the late-December death of Transportation Commission Chairman Ric Williamson, Gov. Perry’s point man on the huge Trans-Texas Corridor project and the most vocal toll road promoter in the state.

The suit brought by Hall and TURF against two top officials of TxDOT seeks to prevent the agency from spending any more taxpayer money on either lobbying legislators or political advocacy. “Both of those are illegal under the Texas Government Code,” Hall said, “and yet both are being done. So we’ve asked for information related to those illegal acts.” She pointed to a visit last fall by Williamson to Washington, D.C., when the agency announced he was lobbying federal legislators to ease toll road regulations. The Texas attorney general’s office, representing TxDOT, has challenged Hall’s right to sue the government, while simultaneously claiming that no illegal acts have been committed.

“Basically, the state claimed that TxDOT didn’t do anything illegal and therefore our suit should be tossed,” said Hall. “We claim that the department did act illegally, but [we] can’t show that until we get documentation – on telephone calls, Williamson’s travel expenses, and whom he met with in D.C., the companies hired to promote toll roads, and so forth.”
In a surprising legal twist, Judge Orlinda Naranjo ruled in December that Hall and TURF did have the right to pursue their suit, but asked that they limit the amount of documentation they were requesting. TURF attorney Charles Riley said a narrower request has been filed. “Our suit basically has two prongs,” Riley said. “The first is that the Keep Texas Moving campaign is an illegal attempt by the government to engage in political advocacy. TxDOT is claiming that campaign is over, so there’s no reason to give us information on it. But we’ve got documentation to show there are plans for future campaigns, and that’s what we want to follow.”

The second prong deals with the lobbying issue, which Riley, like Hall, said is illegal. “It’s very clear that the department of transportation was lobbying the state legislature in the last session to kill the toll road moratorium. And they also lobbied [Congress] seeking to toll existing roads.” Records on those activities, he said, are public information. Assistant Atty. Gen. Kristina Silcocks has argued that the Texas Transportation Code allows the agency to “engage in marketing, advertising, and other activities to promote the development and use of toll projects.” Hall has also filed a complaint with Travis County District Attorney Ronnie Earle, whose office investigates crimes related to the operation of state government. “If we really want to know what took place in the back room when the deals for parceling out the Trans-Texas Corridor to foreign companies were cut, it’s going to take a criminal investigation,” Hall said.

Travis County prosecutor Beverly Matthews said the complaint is being considered. “We’re weighing the merits to see if a criminal investigation is in order.” But while Hall’s lawsuit – and a possible criminal investigation – could become a major thorn in TxDOT’s side, the loss of Williamson has to be a stunning blow to the department. The fiery commissioner frequently spoke of toll roads as the only way out of Texas’ current shortfall in road-building funds. He was often described as the person Perry most trusted to take the public hits for his vision of the Trans-Texas Corridor, a vast proposal of superhighways to be built and operated by private firms. “Very few people can do what Williamson did,” said Hall. “There may not be anyone else as willing to front for Perry as he was.”

But while Perry is no doubt looking for a successor to Williamson, Hall would prefer that the department do a lot more than find a new chairman. “I think it’s time to make TxDOT more responsible to the people of Texas, and under Williamson’s leadership that didn’t happen and wasn’t going to happen,” she said. With the whole department up for sunset review in 2009, Hall would like to see it run under the leadership of an elected official, rather than a political appointee. “An elected official would have the public to answer to,” she said. “And with the sunset provision coming up, this is the perfect time for TxDOT to start over and have the whole department remodeled.” Fighting Perry on toll roads is still an uphill battle, but Hall said she’s optimistic, given the growth of the grassroots opposition movement. “If we don’t believe that it [revamping the whole transportation agency] could happen, it won’t. If enough people want it to, and if politicians understand that there will be consequences for what they do, it could,” she said. “And that’s where you start.”