Brian Wright and the Waco Tragedies’ Bluebird is a lyrically interesting rock CD that leans toward aggressive, energy-filled folk. 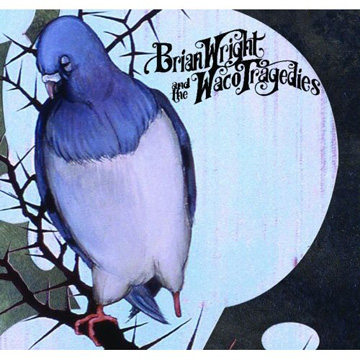 The music is strong and sometimes borders on overcrowded but never crosses into cacophony without good reason. The songs deal with a world that finds its beauty in complexity and the way men and women get along. Or don’t. On “(Let it Spin) Over and Again,” a man and a woman play a worn-out favorite song on vinyl, a metaphor of their relationship, of course. On “Former Queen of Spain,” a woman falls from God’s grace and a man wanders around the crash site, finding her parts. The chorus claims, “That ain’t love / It’s close enough.” On “Central Park,” the narrator meets a man who says he painted everything he feared, until the whole world became his art.

The seven-man band, originally from Waco but now based in Los Angeles, is joined in the studio by four more musicians, in an intriguing mix of percussion, bass, keyboards, lap and pedal steels, guitar, fiddle, mandolin and mandola, harmonica, resonator guitar, and saxophone. The overly exuberant news release that accompanied the album invokes Dylan, The Band, the Beatles, Willie Nelson, Johnny Cash, Ryan Adams, and the Rolling Stones, although the literate and musically dense Bluebird sounds more like it was influenced by, without copying, The Gourds. It’s a good listen on several levels.- Tom Geddie