Home Calendar Big Ticket Big Art, Little Art
SHARE
Facebook
Twitter
It’s too early in the year for the local museums to be launching major exhibits, but some of them are giving us new stuff to look at all the same. 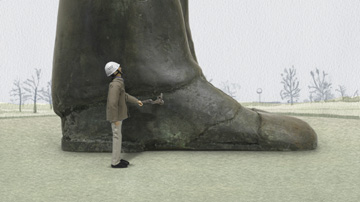 The Modern Art Museum continues its ongoing series of exhibitions called Focus with an installation by University of Pennsylvania art professor Joshua Mosley. The show consists of a 71/2-minute animated video called A Vue (taken from the French rock-climbing term for a clean ascent with no knowledge of the route) and a sculpture called George Washington Carver, 150 ft. The former work tells the story of a maintenance worker consumed by his job of caring for the Carver monument, which looks 150 feet tall in the video but in real life turns out to be only 24 inches. The stop-motion puppetry in the video gives it the look of a Rankin-Bass cartoon, but the sad detachment of the story and Abby Schneider’s spare music gives this a power all its own.

Out east, Arlington Museum of Art gears up for its annual fund-raising auction by unveiling Shine 2008: Black & White. As in previous years, the show is made up of artworks in various media donated by more than 100 local artists, which will be sold off in February to keep the institution going. The theme of this year’s show is black and white, so we’re expecting depictions of zebras, penguins, nuns, chess sets, old movies, and knock-offs of Robert Motherwell. Sorry, it’s hard to write about an exhibit when no one tells you what’s going to be in the show. You should probably check it out for yourself.