As any good soundtrack should, Honeydripper helps bring the movie to life by creating, along with the scenery and the actors, the atmosphere that lets the DELETE breathe. 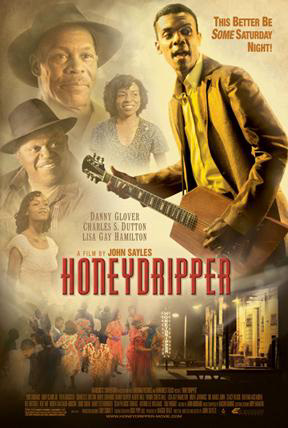 The more seamless the music, the more likely viewers are to believe the movie. The movie, directed by John Sayles and set in rural Alabama in 1950, tells the story of a piano player/bar owner named Tyrone “Pine Top” Purvis whose club is going under. He hires a famous guitar player for a one-night gig to make enough money to save the club, but the picker doesn’t show up. The soundtrack, though, makes it abundantly clear that someone talented arrived to make the music. Boogie-woogie piano blues dominate. There’s also a Hank Williams the First song, “Move It On Over,” about a man who winds up in the doghouse when his wife locks him out of the house-house, and a couple of Pentecostal gospel numbers that sound like they were recorded in a little frame church with the windows open.

The 15 songs – some familiar tunes and some that just seem that way – rely heavily on the kind of piano playing that Jerry Lee Lewis heard in the black churches of his youth and that helped turn rockabilly into rock ‘n’ roll. Filled with the stereotypes of juke joints and churches, good times and consequences, and the inevitable come-to-judgment-day showdown, the soundtrack features performances by Ruth Brown, Lil Green, Mable John, Keb’ Mo’, Memphis Slim, Gary Clark Jr., and Danny Glover, star of the movie, doing a passable job on “Goin’ Down Slow,” a man’s admission that he’s “done had his fun.”
The music manages to sound as though it’s from another time, without sounding dated. -Tom Geddie