I did something unusual while preparing to write my review of There Will Be Blood: I read everybody else’s reviews. 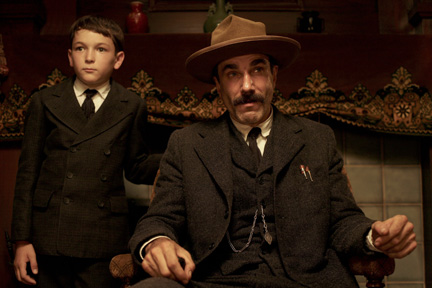 Specifically, I read the ones that hailed Paul Thomas Anderson’s latest film as a titanic masterpiece, the best film of the year, and the flowering of America’s great cinematic genius. There was no shortage of reviews like these, and they were fun to read, but I was looking for an argument that would win me over. Instead, they only confirmed my initial impression, which is that this film aims for greatness and misses, but remains well worth a look.

The bulk of the story takes place in 1911 in California, though the film was actually shot in the desert-like terrain around Marfa, Texas. Daniel Plainview (Daniel Day-Lewis) is a successful oil prospector who’s brought in his share of wells but looks to take on Standard Oil and become a captain of the industry. A misanthrope with a sociopathic need to crush his competitors, Daniel’s one redeeming trait is his love for his 7-year-old adopted son H.W. (Dillon Freasier), which doesn’t stop him from putting the boy on display when he’s buying up property, figuring that people will be more apt to trust a guy with a cute kid.

The movie is adapted from the first 150 pages or so of Upton Sinclair’s novel Oil! A poor novelist and a great journalist, Sinclair conforms rigidly to the sentimental fiction of his time, and his prose is full of forced colloquialisms. (Yessirree!) Yet his evocative deDELETEions of people and places could immerse you in a world far from your own and lay out its workings with great precision. This aspect of the novel is well-suited to the talents of Anderson, who previously gave us Boogie Nights and Magnolia. Much like those films, this is a big, messy picture with parts that don’t fit together. At the same time, There Will Be Blood is so unlike those films that you wouldn’t guess it was directed by the same guy. It doesn’t have vertiginous tracking shots or whirling crane shots or musical numbers. Its few set pieces (like the oil-well fire) are managed crisply and efficiently rather than with a flourish. There’s hardly any camera movement at all – the shots are static and painstakingly composed. Whereas Anderson’s previous films had torrents of verbiage, this one has huge stretches with no dialogue. Much has been made of the magnificently tense silences in No Country for Old Men, but this film accomplishes even more nonverbally. The first 20 minutes here pass by without a word, and yet Daniel’s character, situation, and typical working routine are all firmly established.

The movie owes much of its momentum to a highly unorthodox score by Radiohead’s Jonny Greenwood. The music is performed mostly by string orchestra and piano, but there isn’t any period nostalgia lurking here. Instead, Greenwood has the strings play out obscure atonal configurations like in Xenakis’ or Penderecki’s music. (In other words, like the score of The Exorcist.) The film is edited at a fairly uniform pace that would seem monotonous if you took the music out. Instead, the music works to speed up the narrative or slow it down, creating tension and then releasing it in beautifully resolved chords. This is the best movie score of 2007. The story contains some rewarding subplots regarding an accident that deafens H.W. and a man who turns up claiming to be Daniel’s half-brother (Kevin J. O’Connor). However, the film really turns on Daniel’s confrontation with Eli Sunday (Paul Dano), a self-proclaimed young preacher who lives on a dusty ranch that Daniel wants to buy and who tries to squeeze every penny he can out of the oilman. The irreligious Daniel spends much time sizing up Eli and gauging how much truth there is in his Christian rhetoric.

Eli could have meaningfully commented on Daniel’s hypercompetitive materialism, but instead Anderson turns him into a penny-ante charlatan. This leads to a deeply problematic epilogue consisting of an overlong scene in which Daniel disowns the now-grown H.W. and a final confrontation between Daniel and Eli in the private bowling alley in Daniel’s mansion. The acting and writing are deliciously chewy stuff – Anderson fans have already adopted “I drink your milkshake!” as a catchphrase – and the scene possibly works if you look at it as a logical end to Day-Lewis’ performance, which bubbles over with volcanic rage. What I see is a crazy, cartoonish, and violent end that clashes with the tone of restraint adopted by the preceding 150 minutes and feels like something tacked on from a different movie. The ending is supposed to be like Citizen Kane’s, as Daniel’s drive to succeed alienates everyone and results in spectacular self-destruction. Yet instead of feeling I’d witnessed a great human tragedy, all I could think was, “Man, P.T. Anderson’s lost his head again!” Of course, we all love this filmmaker partially because he’s prone to doing that. It still doesn’t fix the ending of There Will Be Blood, a daft, ambitious, sometimes dazzling epic that narrowly misses being a masterpiece.

There Will Be Blood
Starring Daniel Day-Lewis and Paul Dano. Written and directed by Paul Thomas Anderson, based on Upton Sinclair’s novel. Rated R.