The word has been atypically slow getting out about Woody Allen’s latest thriller Cassandra’s Dream. 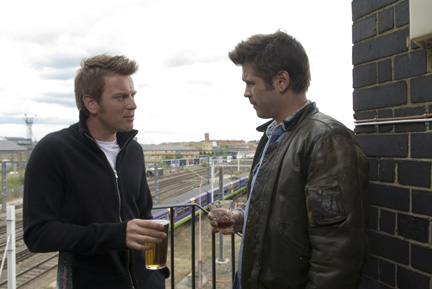 Released at the end of last year for awards consideration, the film got tepid initial reviews in L.A. and New York and wasn’t even screened for North Texas critics in time for us to vote on it. Plus, it has a terrible title. These are surefire signs that this is one of Woody’s stinkers, right? Well, no. It’s not one of his best movies, either, but it’s an interesting failure.

The main characters are Ian and Terry (Ewan McGregor and Colin Farrell), sons of an ailing two-bit London restaurateur (John Benfield). Terry’s an auto mechanic who likes to play the dogs and fancies himself a cardsharp until he buys his way into a high-stakes game and winds up almost $180,000 in debt. Ian, no less fatally, has expensive tastes and dreams of getting out from behind his dad’s restaurant counter by investing in a California resort hotel. When they receive an unexpected visit from their rich Uncle Howard (Tom Wilkinson), a plastic surgeon with his own chain of clinics, the brothers see an opportunity to hit him up for money.Uncle Howard is happy to oblige – all they have to do is kill somebody for him.

The performances alone make the movie worth checking out. Farrell gets off to a wobbly start – his scruffy acting style makes him much better suited to playing American guys than English blokes. However, he looks quite convincing when Terry unravels from the strain and turns into an alcoholic, pill-popping wreck. Farrell makes a telling contrast with McGregor, who carries off his part with an awe-inspiring light touch. Ian seems too smart and resourceful to get snared in a plot like this, but McGregor captures the character’s unbearable itch to leave south London and his weakness for fast cars and beautiful women. Opposite them, Wilkinson’s role basically comes down to one showpiece scene in the middle of the film, where he meets the brothers in a rain-soaked park and proposes the murder. The desperation and rage born of Howard’s sense of entitlement radiate from this actor until you can’t look anywhere else. Just as he did in Michael Clayton and other movies before this, Wilkinson proves his flair for portraying middle-aged guys who’ve made one too many compromises.

All the roles that Gene Hackman was playing 20 years ago, Wilkinson is playing now, and he’s doing them superbly.
Aside from the acting, Allen’s still-underrated skill as a creator of suspense is the best thing here. The murder plot is good for two excellent, sweaty, dread-laced sequences when the brothers try to carry out the killing – one where they get into their target’s flat and try to ambush him, the other when they follow him through the streets late one evening as he strolls home from his mother’s house. The same unerring sense of timing that makes Woody Allen’s best comedies so funny serves him well when he decides to turn the screws.

These are considerable strengths, but everything else about Cassandra’s Dream is weak. For starters, the dialogue is awfully clunky. When Allen’s powers of characterization are at a low ebb like they are here, he spells everything out for us – his way of letting us know that Ian stays at the restaurant only out of love for his dad is to have Ian tell his dad, “I stay here because I love you.” The scenes between the brothers and their parents are heavy with this kind of literal-minded stuff. Worse, there’s also a lot of tedious philosophizing about the role of fate in human lives and whether God’s law is being broken. It’s nothing we haven’t heard before, it’s nothing we haven’t heard from Woody Allen before, and it dilutes a two-hour film that should have been 90 minutes of concentrated power.

Also diluting the film is a romantic subplot between Ian and a struggling actress (sultry newcomer Hayley Atwell), which takes up a lot of the early going, then hardly develops at all in the film’s second half. The desire to keep this high-maintenance girl in fine style is supposed to help drive Ian to crime, and he keeps going on about how mad he is for her, but the two actors have no chemistry together. In Allen’s earlier Match Point, you believed that Jonathan Rhys Meyers would jeopardize everything for Scarlett Johansson and the hot sex they were having together. There’s nothing like that here.

Cassandra’s Dream suffers from proximity not only to Match Point but also to Before the Devil Knows You’re Dead, a much better crime thriller about two brothers who drag each other down through their human frailties. This film’s siblings have their tragic final confrontation on a sailboat, and the ending seems overdetermined (though just about any other ending would probably have come off the same way) and arrives too suddenly. All the good work that goes into Casandra’s Dream is well worth seeing. It’s just a shame that the movie makes so little impact.