Penelope is one of those movies that looks really bad on paper. 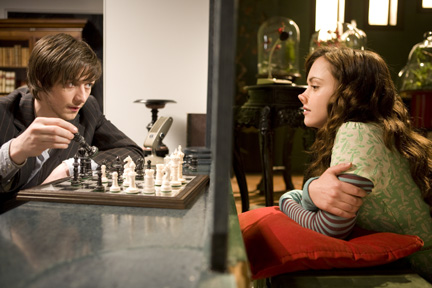 A PG-rated female self-empowerment fable about an anatomical freak seeking the happiness that she deserves because she’s beautiful on the inside? Gag! The thing is, though, once you actually see this movie on the screen, it turns out to be much weirder and drier-eyed and more complex than you’d imagine. Well-intentioned folks will tell you to take your daughter to see this movie, but I daresay you’ll find it worth checking out all on your own.

Christina Ricci plays Penelope Wilhern, the first girl born into her wealthy family in five generations and thus the first to fall victim to a decades-old curse that results in her being born with a pig’s snout instead of a nose. Her mother Jessica (Catherine O’Hara) has kept Penelope out of public view for all 25 years of her life, but the only way to break the curse is to find a similarly rich man who’s willing to marry her anyway, so Mom brings a series of moneyed male heirs to the Wilhern estate’s library, and Penelope chats with them through one-way glass via a microphone. Invariably they flee in terror when Penelope actually presents herself to them, until Max Campion (James McAvoy) turns up. Strapped for cash because of a nasty poker habit, Max is being paid off to snap a picture of Penelope for the tabloids, but he falls under her spell instead.

That plot summary only covers the first section of a film with at least four – the episodes in Penelope’s life don’t flow together as well as they could have, but the story’s density makes this original work feel like something adapted from a lengthy novel. Screenwriter and TV sitcom veteran Leslie Caveny deftly negotiates both big story problems (how to avoid an ending that hinges on Penelope marrying the right guy?) and little ones (how does Penelope drink a beer in public without revealing her face?). Particularly piquant is the way Jessica is depicted as a caring mother who’s so bent on protecting Penelope that she squashes her daughter’s self-esteem at every turn – O’Hara does a tightrope walk of a performance in a difficult role.

The movie’s filmed in a Tim Burton-like expressionistic style and set in an indeterminate city that appears to be New York and London smashed together. To enhance the effect, the cast is evenly split among American and British actors, some of whom work in their native accents while others (including McAvoy) adopt a Chicago twang. Creating a whole quasi-fantasy world like this requires a delicate touch, and while first-time director Mark Palansky is occasionally clumsy, he does have his glorious moments, like Penelope’s first glimpse of the outside world, at a numinously beautiful street fair.

A bevy of sharp performances carries the movie over its rough patches. McAvoy’s puppy-dog charm, tamped down for his starring role in Atonement, is back in full force here. This actor can handle heavy drama, but light comedy is what he’s really good at – check his infectious sense of fun when playing bass, saxophone, and drums badly with a jazz band. The chemistry between the lead actors rocks, which is pretty good considering that they aren’t even in the same room, and the wordless bit when Penelope shows her face to him is authentically gripping. For her part, Ricci never begs the audience for pity or lets the character become a simp, and given how easily the actress’ harsh, nasal voice can shade over into whining (Monster), this is a big achievement. She particularly shines in the film’s third section, when Penelope runs away from home with a scarf covering her face and tries to operate on her own.

The secondary characters all act out of recognizable motivations, which is why the supporting actors come out so well. Richard E. Grant has one memorable self-lacerating freak-out as Penelope’s dad, while Peter Dinklage gives a bracing, no-nonsense performance as a bitter one-eyed paparazzi photographer who finds his conscience. Most surprising is Reese Witherspoon in the small role of a punk-rock chick who befriends Penelope – and by “befriends” I mean “talks her ear off while Penelope sits there and nods.” The Oscar winner underplays cannily (great low-key reaction to finally seeing Penelope’s face) and drops her usual brightly charming façade to create a spiky, sardonic character that’s unlike anything we’ve seen before from her. This is her most interesting performance in years.

The movie fakes us out with a late speech by Jessica that seems to deliver a canned message, but then the character ruins the moment in spectacular fashion, and everything’s all right again. A single false note would have made this entire movie implode, but amazingly it never happens. That and the high-quality acting give this movie a strong resemblance to last fall’s contemporary fable Lars and the Real Girl, except that Penelope isn’t burdened by that film’s conceptual flaws. Much like its main character, the movie has some awkward stretches but eventually stands tall amid its unique charms.